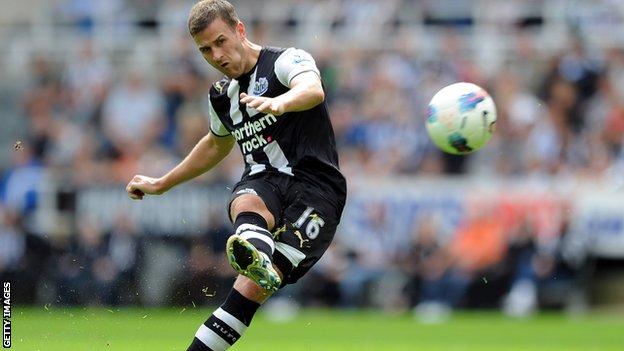 Ryan Taylor will return to the Newcastle squad for Sunday's trip to Tottenham after spending 26 months on the sidelines with injury.

Taylor, 30, has spent two years regaining his fitness after damaging his cruciate ligament in August 2012.

He had a recurrence of the injury last April but is now ready to come back.

"Ryan should return this week, and I think that is an inspirational story to everybody here and in football," said Magpies boss Alan Pardew.

"He has had terrible, terrible luck with injuries and it is so pleasing to put his name on the team-sheet this week to travel. It is good news for us, because he is a very well-liked guy."

Taylor, who suffered the original injury in a Europa League tie against Atromitos, is unlikely to be involved at White Hart Lane after playing his first 90 minutes since the summer of 2012 for the club's Under-21s earlier this week.

But Pardew believes simply having him back and in and around the first team is a major boost.

"He's just a good person to have at the training ground," added the manager. "What Ryan brings is a real good knowledge and a good understanding, and a professionalism that can inspire others."

Taylor joined Newcastle from Wigan in February 2009 as part of the deal which saw winger Charles N'Zogbia move in the opposite direction.