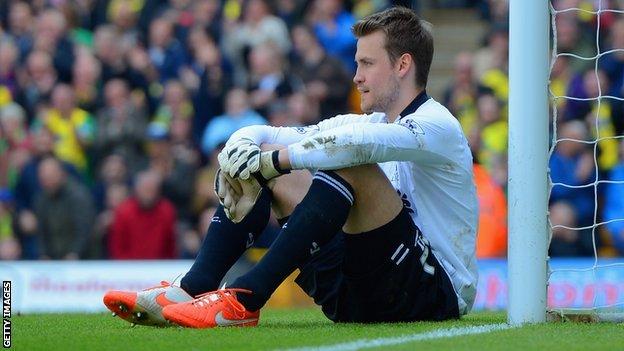 Schmeichel said he was "shocked" when he heard Neville's comments.

In response, Neville later wrote on Twitter "get over it".

"Haha! Every time a keeper gets criticised it's personal! He made a mistake 'Get over it'," the former England right-back said.

"It was a character assassination that Gary Neville did to Simon Mignolet," Schmeichel told BBC Radio 5 live.

"I have to say I don't think the boy has done too bad since that night where he was taken apart by Carragher and Neville.

Jagielka's late goal earned Everton a 1-1 draw at Liverpool, who had led through Steven Gerarrd's opener.

Neville acknowledged in his critique of Mignolet, who joined Liverpool from Sunderland for £9m in June 2013, that it was an "amazing strike" by Jagielka and that he was a "harsh" judge.

However, he also questioned some of Mignolet's performances from last season.

Schmeichel added: "I'm looking at the goals and I'm thinking, 'What do you expect? Do you really honestly expect him to save everything?'.

"I just think what was done on Monday Night Football was out of order because it was a really, really good shot, and it was demonstrated how low he was, but by someone who's played right-back all his life."