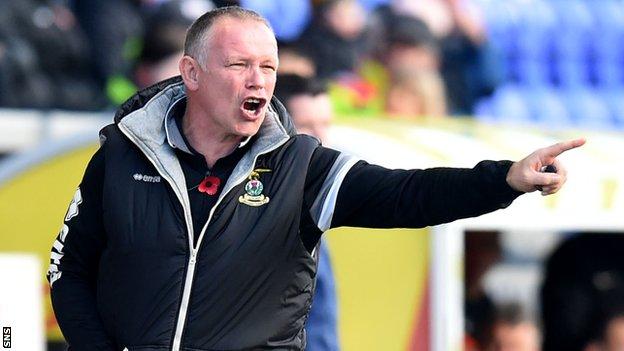 "You have to give Hamilton credit, they've been remarkable and so have Kilmarnock and Dundee," said Hughes.

"Scottish football's so-called smaller clubs are punching well above their weight - so it's exciting.

"To get 23 points in in the first quarter is absolutely outstanding."

Marley Watkins fired the only goal of the match in the 11th minute, although he came close to adding a second moments later.

United had little to offer the Highland side, and Hughes felt the win could have been more comfortable.

"We certainly deserved it," said Hughes. "We created a number of chances.

"All credit to Dundee United, they're always dangerous, they hang in there, but I felt overall we deserved the game.

"But I'm a bit disappointed we didn't score another goal."

Watkins has now scored in three successive league matches for Thistle, and Hughes believes his players are demonstrating a positive approach to winning matches.

"I felt our ball retention, our shape and our turnover of the football was more determined," said Hughes. "When we get the ball back quick we can be more decisive.

"When we get into that final third, we've got to be more clinical, but in terms of commitment and shape, I can't ask for any more.

"It's usually been the same team with the same shape and we go about our business."