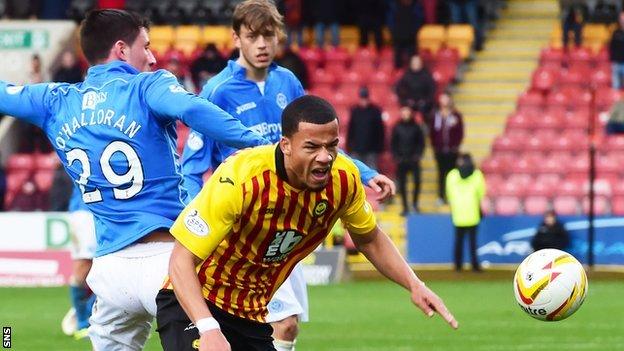 Alan Archibald was left lamenting the absence of creative players through injury after his Partick Thistle side's 0-0 draw at home to St Johnstone.

And Kallum Higginbotham, Gary Fraser and Sean Welsh will still be on the sidelines for Wednesday's League Cup trip to face Celtic.

"We are missing Kallum and Gary Fraser, who has a killer pass, and Sean Welsh," said Archibald.

"Guys like that will come back in and give us more options."

The draw with Saints followed last week's 1-0 defeat by Dundee United, both games in which Thistle players saw plenty of the ball.

"I thought it was a bit flat from us today, but it's a good point and a good clean-sheet," said Archibald. "It had 0-0 written all over it at times.

"I don't know if the conditions made it not great game to watch, but I just thought we could have done more in the final third.

"We still had plenty of possession - we just missed that wee cutting edge, but credit to St Johnstone - they are a hard team to play against and are a good defensive unit.

"We are delighted with a clean sheet first and foremost, but a lot of our stuff was in front of St Johnstone, which was disappointing from our aspect being the home team."

However, Archbald remained positive about his players' efforts and singled out keeper Scott Fox, who denied Lee Croft a goal with a save after the St Johnstone winger sped through on the best chance of the game.

"The lads worked ever so hard," he said.

"I don't think we moved the ball quick enough. There was a zip on the surface to do it and penetrate a bit more.

"At times we got it down, but we didn't do it quick enough and sharp enough and we can do better than that.

"He is coming back into form, Scott, and I think he had one of them last week and he had one against Motherwell as well.

"He is good at one-on-ones and I'm delighted he's back on form."