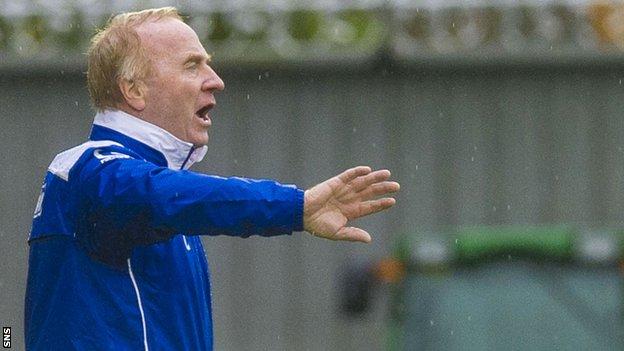 St Mirren manager Tommy Craig insists a disallowed Ross County goal during their 2-2 draw in Paisley should have been awarded.

A late offside decision was given against Michael Gardyne, who had fired beyond Buddies keeper Marian Kello.

"This rule, the linesman delaying flagging for offside is one that gets managers, fans and coaches uptight.

"If Michael Gardyne went forward and scores, they get a goal - I don't think it was offside. It's a tricky one."

The draw gave St Mirren their first home point of the season after coming from behind twice.

Paul Quinn's header for County was cancelled out by Adam Drury nodding in a leveller, then a cool finish from former Buddie Graham Carey gave County the lead again.

But the hosts replied through Jeroen Tesselaar, who fired in with 30 minutes remaining, in what Craig described as an entertaining match for the home fans.

"If you had asked me after an hour, I'd have said we were well on top, making good progress and creating chances," said Craig.

"But once again, the chances weren't being converted and in the second half, I thought we were the better team.

"In the last half hour, it was a game for the neutrals - there was attacks back and forth, and they got in front, but we showed enough character to get back and make it 2-2.

"I'm disappointed with the goals, I'll need to look at them again, but they didn't look too clever from our point of view."

Craig continued to acknowledge the frustrations of the Buddies' fans who are keen to see their club move out of the Premiership basement zone, but pleaded again for the supporters to continue to back the team going forward.

"The fans are frustrated and angry, and who wouldn't be," said Craig.

"They come along every week, particularly at home, and they expect us to win games.

"I feel the same as them, but I ask them to stick by the players through thick and thin."