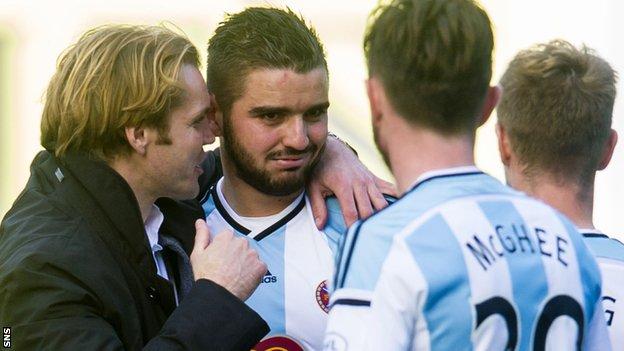 Hearts head coach Robbie Neilson insists his side deserved a point following the 1-1 draw against Hibs.

"We got a man sent off, I thought we showed some spirit to get back in the game," said Neilson.

"We got our reward at the end. I don't know if Hibs would say differently - because losing a goal in the last minute can be hard to take."

Hearts spent most of the first half on the back foot and Malonga's opener looked set to be the only goal of the match until Ozturk delivered his sensational leveller.

Callum Paterson was sent off for the visitors in the 79th minute for a rash challenge on Malonga, but despite the extra-man advantage, Hibs could not make it count and Neilson believes it demonstrates the strength of Hearts' character.

"We changed the formation and went two up front, and went for it," he explained. "We continued to pass it, which was pleasing."

The point earned means Harts press on with their unbeaten start to the Championship season, with 29 points from 11 matches, and Neilson singled out Ozturk's sensational leveller as a contributing factor in the draw.

"It keeps the run going and keeps us unbeaten," said Neilson.

"The goal was something he's fantastic at - he should probably do more of it.

"We work on it in training and he steps forward and people sit in for cover.

"Nine times out of 10 we ask him to hit the pass and slip someone in, but he has a good strike and takes our free-kicks.

"It was a fantastic strike. as soon as it leaves his boot, he probably knows it's going in."