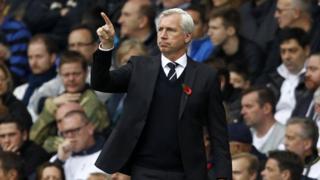 Manager Alan Pardew feels Newcastle "deserved everything", crediting his players' "belief" and "fight" after turning around a first-half deficit to win 2-1 away at Tottenham.

Sami Ameobi scored eight seconds after coming on as a half-time substitute to cancel out Emmanuel Adebayor's header.

Debutant Ayoze Perez scored the goal that gives Newcastle back-to-back wins after starting the season without a victory in seven.