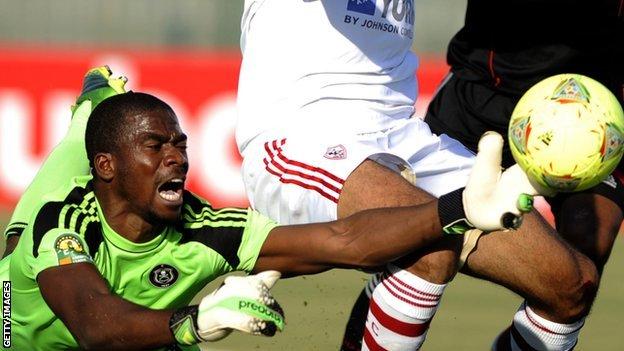 Senzo Meyiwa did not look like a goalkeeper; he was short and nuggety, built a little like a pocket rocket.

But what he lacked in aerial prowess he more than made up for in gutsy determination, evolving into one of the best shot stoppers on the African continent.

He proved many a doubter wrong with his performances between the sticks and he was flourishing at the top of the game at 27 years old when he was tragically shot dead on Sunday.

In the last months, Meyiwa had been appointed South African captain as he stood in for the injured Itumeleng Khune in the Bafana Bafana goal for the 2015 Africa Cup of Nations qualifiers.

He had only won three caps before he was handed the armband by new coach Ephraim Mashaba, immediately taken with the ebullient and bubbly personality of the Orlando Pirates goalkeeper.

"We're going to miss Senzo a lot," Mashaba said at a tearful news conference in Johannesburg on Monday.

"Let alone his goal-saving skills, he was a team player, he was everything.

"He carried the team through the Africa Cup. I don't know why there was any doubt about him being the best goalkeeper."

Meyiwa proved a stalwart for the side just two games ago in arguably South Africa's most vital qualifier to date in Group A.

A multitude of key saves in the match against Congo in Pointe Noire ensured Bafana Bafana took three valuable points as they came away with a rare away victory in hostile surrounds.

Meyiwa had one year earlier, just across the Congo River, played possibly his most memorable match as Pirates took on TP Mazembe of the Democratic Republic of Congo in Lubumbashi for a place in the group stage of the 2013 Champions League.

Pirates had a 3-1 lead from the first leg of the third-round tie but were quickly under siege in a match they claimed could have been fixed such were the decisions that went against them.

Twice the referee handed disputed penalties to Mazembe and twice Meyiwa came up with massive saves to take the stuffing out of the host side and see Pirates through to the next stage.

They went on to reach the final for the first time since their only previous appearance in 1995, when Meyiwa was just a wide-eyed, eight-year-old fan from Umlazi in Durban.

He joined Pirates as a 13-year-old but for many seasons played back-up to first-choice stopper Moeneeb Josephs.

In his first six seasons as a professional with the club, Meyiwa made only 63 league and cup starts - an average of 10 per season.

But when Josephs began to lose form Pirates decided not to renew his contract, believing they had found their man in the persistent character of Meyiwa.

Meyiwa played throughout 2012-13 season with much aplomb and it came as a surprise when Pirates signed Ghana international Fatau Dauda in the middle of last year.

However, it was a challenge that Meyiwa took head-on: he never allowed the World Cup-bound Dauda a look-in, so much so that the Ghanaian's place in the national team at the tournament in Brazil was threatened because of his lack of game time.

Dauda never came close to dislodging Meyiwa as Pirates went to four successive cup finals in the 2013-14 season, winning the South African FA Cup at the end of the season in May. They lost in the Top Eight, League Cup and Champions League finals.

This season Pirates made it five finals in a row when they reached the Top Eight decider again, losing by the odd goal to arch rivals Kaizer Chiefs in September.

But on Saturday, Pirates took a step closer to a sixth successive final as Meyiwa helped them to a 4-1 win over Ajax Cape Town in a rain-sodden League Cup quarter-final encounter at Soweto's Orlando Stadium.

The score-line flattered Pirates as Meyiwa made some key saves in the tie, beaten only from the penalty spot.

Less than 24 hours later he was dead - and South African football was robbed of one of the brightest rising stars in its game.