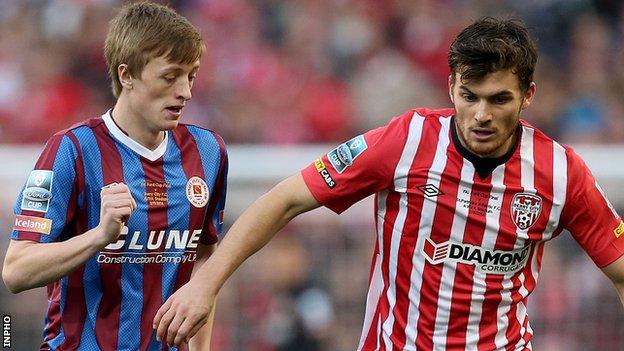 Derry City's season ended in bitter disappointment as Dublin side St Patrick's Athletic won 2-0 to lift the FAI Cup for the first time since 1961.

Christy Fagan netted the opening goal of the final with a slightly deflected shot which went in off a post in the 53rd minute at the Aviva Stadium.

St Pat's had been on top for most of the game, although the goal spurred Derry into a spirited response.

However, Fagan scored a breakaway goal to seal the victory in stoppage-time.

The cup had been City's only chance of securing European competition for 2015/16 as their Premier Division campaign had long since petered out.

Peter Hutton's men finished eighth in the final table, a fact which meant they were firm underdogs going into Sunday's showpiece occasion.

They seemed content to allow Liam Buckley's men to come on to them in the first half with top scorer Fagan forcing two saves from City keeper Gerard Doherty.

Late in the half Fagan was just inches away when his shot went wide.

However, the former Republic of Ireland Under-21 international did find the net early in the second half.

Fagan might not have made the cleanest of contacts when he shot from about 10 yards, and it took a slight deflection, but it had enough for the ball to go in off the post.

Derry will feel they should have kept it out, but defender Danny Ventre could not get back to clear.

The goal changed the pattern of the game, with Derry forced to be more adventurous.

The Candystripes pressed continually but their challenge ended when a mistake by Barry Molloy let Fagan in to score the second in the final minute of stoppage-time.

Derry City manager Peter Hutton: "Once we went behind we had to go for it.

"We rallied well and created a few half chances. Unfortunately, we could not take them.

"It was a really tight affair and our players showed a lot of character, particularly the young lads."