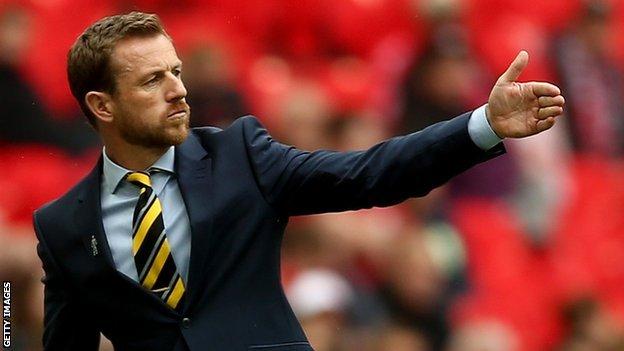 Chairman Ben Robinson says Gary Rowett's ambition and achievements while Burton Albion boss meant it was inevitable he would join a bigger club.

Rowett, 40, was named Birmingham City manager on Monday after just over two and a half years with the Brewers.

Robinson told BBC Radio Derby: "He has been a great manager.

"He is an ambitious young manager and there is nothing wrong with that. He would always go when the right opportunity came along."

Rowett steered the Brewers away from the League Two relegation zone after taking over as manager on a temporary basis in March 2012 and in his first full season he guided the team to the play-offs.

Last season, Rowett's Brewers reached the play-off final and they are currently in the automatic promotion places after an impressive start to the campaign.

Robinson added: "Of course I am sad he is going, but Gary has done remarkably well and has created lots of excitement for the fans and a buzz in the town.

"I am a realist. Other clubs have followed Gary's progress - Notts County, Oxford, Blackpool and now Birmingham.

"But he goes with our blessing and our goodwill with thanks for what he has achieved for us.

"We will miss all that but we have to try to find someone who can take it on."

Former Burton boss Paul Peschisolido, who brought Rowett to the club in 2009, added: "He has been linked with quite a few clubs and it was only a matter of time before another team came calling. He has done a fantastic job at Burton.

"I have seen Gary work and that's why I brought him in as my number two. I think he's one of these special managers - I really do.

"He studies the game. He has a real passion for football and he is always challenging himself and reading books to better himself. I knew he would do well and he will go on to do well. I am hoping he gets Birmingham out of the trouble they are in and I am sure he will."

The Canadian continued: "He needs to raise the spirits, which he won't have a problem doing because he is a bubbly character. He has a good sense of humour so he will relate to the players.

"And then he has to get on the training pitch and make them more difficult to beat.

"He will be tough to replace - no doubt about it, but there won't be any shortage of applicants."

Robinson said Burton would not rush the appointment of Rowett's successor, adding: "It is a crucial decision.

"We will take our time. The intention is to make an appointment as soon as we can but when we make it has to be the right person. We have had a lot of interest."