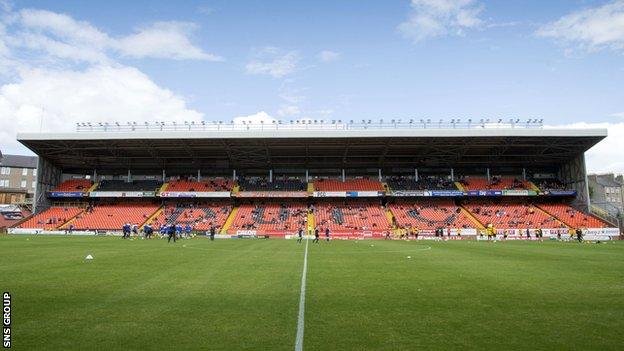 Dundee United duo Paul Paton and Mark Wilson have returned to training and are available to play in Wednesday's League Cup match against Hibs.

The pair missed Saturday's 1-0 league defeat at Inverness CT, with the club investigating their conduct.

Paton was arrested in connection with an alleged assault on the Celtic goalkeeper Lukasz Zaluska.

And Wilson had previously released a statement saying he tended to Zaluska after the incident.

Paton is expected to appear in court next month along with the former Stenhousemuir goalkeeper Chris McCluskey.

United's assistant manager Simon Donnelly told BBC Scotland: "It's normal service has resumed with that one, they are back in training.

"The internal inquiry is ongoing and hopefully it'll be sorted quickly. It's important to get the boys back in and get them focused on their jobs.

"I thought taking them out of the limelight at the weekend was the right decision. They had been under a lot of pressure with the media coverage.

"But this is the start of another week and I think it's only fair they come back in."

Prior to the weekend, midfielder Paton, 27, had been an ever-present for United this season and was last month's Scottish Professional Football League player of the month.

Full-back Wilson, 30, has yet to feature during this campaign, missing the kick-off in August due to an ankle injury.