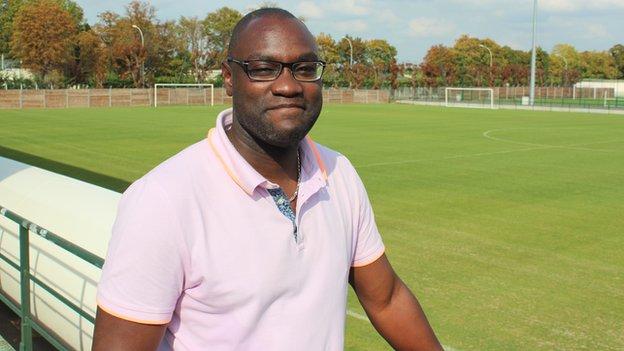 Voting for the 2014 BBC African Footballer of the Year will open on Monday 10 November. Ahead of the vote, Cameroon's Patrick Mboma revealed how he came to win the BBC award in 2000.

As he made his way to the 2000 Olympic Games, Patrick Mboma - who would be captaining Cameroon's football squad in Sydney - knew exactly what he needed.

"When I got to the airport in Paris, I bought a digital camera," the Cameroonian, now 43, told BBC Sport.

"I was thinking that the Olympics meant the Olympic Village and I just wanted to take pictures of Haile Gebrselassie, Hicham El Guerrouj and others.

"I thought I'd be a tourist more than anything because I only knew about six of our players. The rest were new names for me - I had heard about some of them but never seen any of them play.

"I had no idea we were about to win the Olympics."

Refreshingly honest, Mboma laughs as he admits his pre-Olympic build-up focussed more on his camera.

But Cameroon's feats in Sydney helped Mboma beat legendary Ethiopian Gebrselassie and Mozambique's 800m queen Maria Mutola, both gold medallists in Sydney, to win the BBC award for 2000 - the last year it was known as the African Sports Personality of the Year.

Seven months later, the then 29-year-old was one of only two overage players in Cameroon's Olympic squad - since the likes of Marc-Vivien Foe and Rigobert Song were not released by their clubs.

Displaying true indomitable spirit, this Cameroonian band of brothers delivered in spectacular style - with Mboma scoring another four goals, including strikes in the quarter-final against Brazil and the semi-final against Chile.

The final against a Spain side boasting Xavi, Carles Puyol and David Albelda was unforgettable as the Lions roared back from trailing 2-0 at half-time. Mboma's cross was deflected in and Eto'o levelled matters before Cameroon won on penalties.

"I remember people back home telling me they woke at 3am to watch the game and how they returned to bed when we were 2-0 down," says the jovial Mboma, who scored in the shoot-out.

"But then, with the noise as we fought back, everybody came back to see the rest of the game. It was a tough game but what an achievement.

"Probably the most important moment of my career came when we sang the national anthem. I was so proud - it wasn't singing the words, it was crying - because the first ever Olympic medal for Cameroon was gold.

"And when you have an Olympic gold medal, you tell yourself you are like Carl Lewis or Gebrselassie!"

The triumph in Australia's September sun was the perfect way to end a stellar year, one where he had also got married and one which - football-wise - he had barely deemed possible.

For Mboma was nearly 20 before he even joined a club, none other than Paris Saint-Germain.

"I was so old I couldn't think I would be the player I was at the end," recalls a midfelder whose biggest asset was his strength.

Tall and powerful with a cannon of a left foot, Mboma may not have played much for PSG but he did win League Cup and French Cup medals with them.

His fondest and proudest spells came in Japan and Italy, however.

"I had a special experience with Gamba Osaka, where I finished top scorer, which was incredible, as was the relationship with the fans. I signed my first picture of myself while there - I was 26!" he laughs.

"At Parma (2000-2001), I played at my highest level. Unfortunately, we never won the Scudetto but I played with Lilian Thuram, Pablo Cannavaro and Gianluigi Buffon, so it was an experience."

His illustrious colleagues and the Olympic and Nations Cup titles aside, 2000 was also memorable for Mboma's favourite goal as he lashed home a spectacular bicycle kick in Paris to secure a 1-1 draw against reigning world and European champions France.

Just four days after winning Olympic gold, the moment was extra special for a man who calls the French capital home, having relocated there from Cameroon at the age of two.

It may have also decided the minds of any wavering BBC voters.

"I hadn't even been a professional for 10 years and I won the BBC award - I was so proud," says MBoma, who now works as a TV pundit. "It's an important award because I know how the BBC is present at all competitions."

Two years later, he won the Nations Cup again, finishing as top scorer, and also netted at the World Cup for the second finals in a row.

Since his international retirement in 2004, Cameroon have lost every World Cup match they've played and failed to add any more silverware.

Meanwhile, Mboma's trophy cabinet has actually diminished, having given his 2002 medal to his brother while the one he won at the 2000 Nations Cup was stolen on the night of the final.

He's also lost the data stick with his Olympic Village pictures but this pales into insignificance against a lifetime of memories and an Olympic gold medal shining bright for a king of the African game.