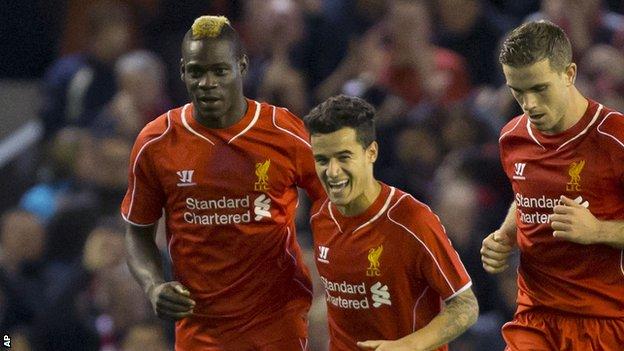 The striker came off the bench to guide in an equaliser before Dejan Lovren's header clinched a 2-1 win over Swansea.

"He twisted his studs in the ground and he was sent to see the physio to see if he was all right or not," said Pascoe.

"He felt something in his knee, but he came on and his knee looked all right."

Italy international Balotelli has faced criticism for both his attitude and goalscoring record since arriving from AC Milan in August.

The 24-year-old was dropped to the bench as Liverpool boss Brendan Rodgers made nine changes to the side which started Saturday's Premier League draw against Hull.

But he responded by inspiring a dramatic Anfield comeback after he was introduced with little over 10 minutes remaining.

Put to him after the game that Balotelli would now be making headlines for good reasons, Pascoe added: "Of course. That is Mario.

"He is working hard in training and he got his just rewards coming on and getting the goal."

And the goal proved pivotal as Reds centre-back Lovren nodded in an injury-time winner after Swans defender Federico Fernandez had been sent off.

Pascoe added: "We had to assess Mario, but he's fine. It was just a precaution. But the way he was moving about, I don't think there was much wrong with his knee."