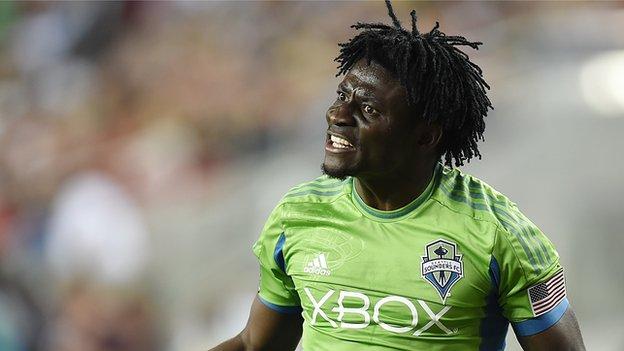 Nigeria striker Obafemi Martins has signed a contract extension with Seattle Sounders, tying him to the Major League Soccer club until 2017.

The 30-year-old said he was delighted to commit to a club he believes can build on recent success.

"I've settled down here and I'm excited to commit to the club for the next few years," Martins told BBC Sport.

"The fans are amazing, the club is awesome and together we are building something massive here."

He added: "My ambition is to win more trophies here and continue to give my best."

This season he has scored 17 goals and made 13 assists in the league helping to deliver the Supporters' Shield and US Open Cup title.

But Martins, who is set to return to the Nigeria squad for next month's 2015 African Cup of Nations qualifiers against Congo and South Africa, is hungry for more.

"We have a fantastic squad and our target right now is the MLS Cup," he said. "It's not just about me but we are one hugely ambitious club, so it's a collective ambition."

Martins, who has scored 18 goals in 39 international matches for the African Champions, was called up only once last year, against Kenya in a 2014 World Cup qualifier.