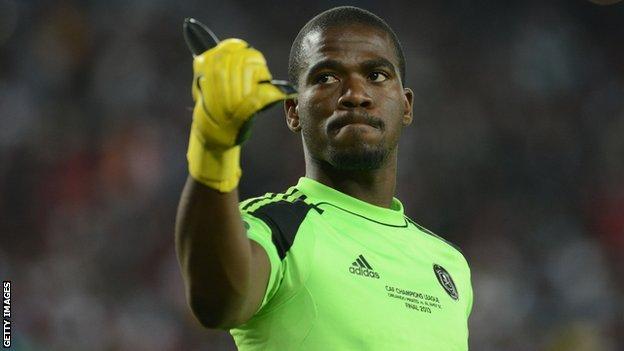 South Africa will honour former goalkeeper Senzo Meyiwa by playing their Africa Cup of Nations qualifier against Sudan in his hometown Durban.

The fixture on 15 November had been scheduled for Nespruit but will now be played at the Moses Mabhida Stadium.

His performances helped to put Bafana Bafana on the brink of qualifying for next year's tournament in Morocco - they will book their place with a victory over Sudan.

The Moses Mabhida Stadium will also be used for Meyiwa's funeral on Saturday after the original venue in nearby Umlazi was deemed too small by organisers, who expect mourners to come from across the country for the popular Orlando Pirates player.

Meyiwa, who was just 27, lost his life in what appears to have been a botched robbery at his girlfriend's house.

South Africa's domestic soccer league has postponed this weekend's derby between Soweto giants Orlando Pirates and Kaiser Chiefs after the death of Meyiwa.