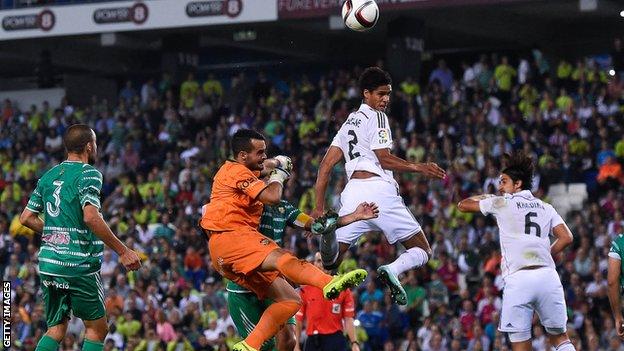 Manchester United loanee Javier Hernandez scored as Real Madrid began their defence of the Copa del Rey with a 4-1 win at part-timers Cornella.

Barcelona-based Cornella, whose players include a dentist and a school teacher, trailed to Raphael Varane's 10th-minute header before Oscar Munoz levelled.

France defender Varane put the European champions into a 2-1 lead at half-time.

Hernandez struck eight minutes into the second half before Marcelo rifled in with 15 minutes left of the first leg.

"It was important to get a good win in this first leg," said Hernandez afterwards. "With all our opponents, the coach (Carlo Ancelotti) asks us to be professional and we treated this game in exactly the same way as we would a Clasico against Barcelona."

Madrid, who beat Barcelona 3-1 on Saturday, were without Cristiano Ronaldo, Gareth Bale and Iker Casillas in a much-changed line up.