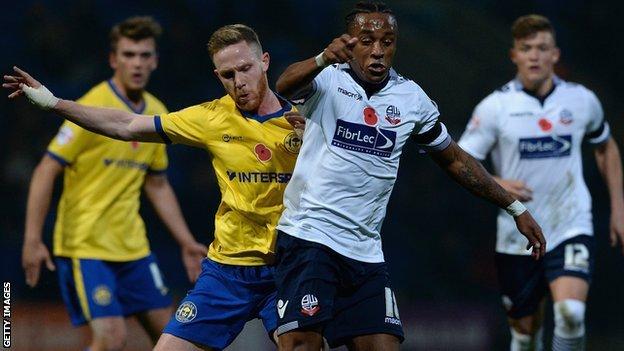 Bolton moved out of the Championship relegation zone by securing a comfortable win against Wigan at the Macron Stadium.

The Latics had the better of the first half as Callum McManaman twice hit the woodwork for the away side.

However, Bolton went ahead after the break as Max Clayton slid in the opener before Craig Davies headed home.

Lee Chung-yong then converted a penalty for Bolton, before McManaman volleyed in a consolation for Wigan.

Neil Lennon's side move up to 18th with 17 points while Wigan, who have won just once since August, drop to 21st and out of the relegation zone only on goal difference.

It will be an especially disappointing defeat for Uwe Rosler after his side had the better chances in the first 45 minutes.

They could have been 2-0 up inside the first 10 minutes as Shaun Maloney volleyed wide from a good position, before McManaman smacked a dipping effort against the crossbar.

Bolton saw plenty of the ball but struggled to make it count, but when Clayton did manage to get through, Wigan keeper Scott Carson was on hand to deny the striker.

The woodwork again came to the home side's rescue just before the break when McManaman struck the post.

Wigan then capitulated as they conceded twice in six minutes, Davies powering home a header before Lee scored from the spot after Matt Mills was fouled.

McManaman got the goal his efforts deserved with a volley, but Bolton closed out the game to record their fifth win of the season.

Bolton boss Neil Lennon: "For the first time in eight, nine weeks we are out of the bottom three and actually looking up the table.

"I think they've put a marker down this week in terms of the level of performances against Wigan and on Tuesday night to show they can certainly play and compete at this level very, very well.

"We've set a benchmark; the game's live on TV across the nation so people are starting to talk about Bolton in a positive way, rather than a negative way.

"That's the first part of the job done."