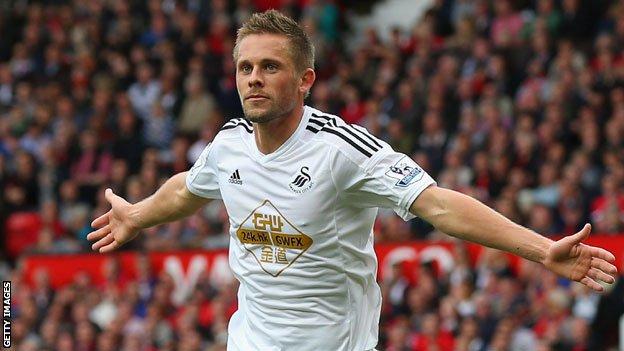 Swansea City are hoping midfielder Gylfi Sigurdsson will be fit to face Everton in the Premier League.

The 25-year-old Iceland international was substituted in the 2-0 win over Leicester and missed the 2-1 Capital Cup defeat at Liverpool.

Manager Garry Monk praised the player who has scored once and has seven assists in eight Premier League appearance this season.

"He's been brilliant, his contribution is there for everyone to see," he said.

Sigurdsson was signed from Tottenham in the summer having previously played 18 times for the Swans on loan from German side Hoffenheim in 2012.

He has been a key player in Swansea's rise to sixth place in the Premier League, and had a hand in both goals against Leicester.

He suffered a groin injury in that match, with the Swans hoping his early substitution will help him make the starting line-up at Goodison Park on Saturday.

"He's come in and started very well from the first game - like all the squad.

Swansea are also hopeful that South Korea international Ki Sung-Yueng will shrug off the shoulder injury he suffered at Anfield.

Monk concedes that Everton will be a stern test after making a poor start to the season.

The Toffees - under former Swans boss Roberto Martinez - picked up only one point from their opening three matches in the Premier League, but have won their last two outings against Aston Villa and Burnley, scoring six goals in the process.

And that recovery does not surprise Monk,

"I know they had a difficult start adjusting to playing in Europe, having to cope with the demands of that like we did last season and I think they were adjusting to that really," said Monk.

"The bottom line is they've got a very good squad, people they've bought for a lot of money and those people are showing what they can do right now, so we have to be right on our game."