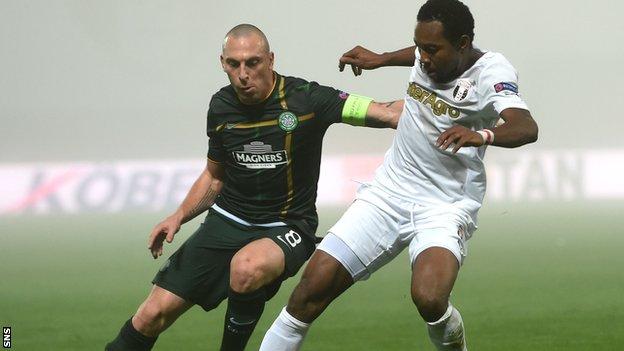 Celtic missed the chance to seal a spot in the last 32 of the Europa League with two games to spare as Astra Giurgiu fought back to earn a draw.

Stefan Johansen fired the Scottish champions into the lead at a fog-bound Marin Anastasovici Stadium.

But the Romanian hosts squared it through William de Amorim's effort, before Vincent Laban was red-carded for a challenge on Charlie Mulgrew.

Celtic are on eight points in Group D and remain well-placed to progress.

The match went ahead despite heavy fog making for very poor visibility.

Celtic created the first chance, when Emilio Izaguirre knocked the ball through a defender's legs and delivered into the area where Johansen fired it goalwards, only for keeper Silviu Lung to palm it wide.

The hosts first threatened midway through the half when Seidu Yahaya cut in from the left and crashed in a shot from outside the box that looked destined for the top corner until Craig Gordon superbly tipped it away at full stretch.

And that save was made all the more crucial minutes later when the visitors edged ahead.

Johansen was hauled down just outside the box and when Mulgrew's free-kick hit the wall and an attempted clearance popped up perfectly for the Norwegian, he fired home from 20 yards with the help of a deflection off Vasileios Pliatsikas.

Mubarak Wukaso and Mulgrew both had shots from distance saved by Lung late in the half, and the hosts had claims for a penalty turned down when Sadat Bukari tumbled under the challenge of Jason Denayer.

Stefan Scepovic passed up a golden chance to make it 2-0 at the start of the second half, firing well over after Johansen played him in with a delightful flick.

Astra then missed a fine chance of their own, with Constantin Budescu blasting high over the bar from Gabriel Enache's centre.

Celtic substitute Leigh Griffiths had an effort blocked when he looked certain to score before Mulgrew's long range shot was tipped on to the post by Lung.

Astra then squared it through sub de Amorim, who curled a delightful shot beyond Gordon and into the top corner from the angle of the area.

Griffiths was denied by a great stop from Lung and the striker then had a goal ruled out for a foul in the box.

The Romanians were reduced to 10 men in stoppage time when Laban was shown a straight red card for a wild lunge on Mulgrew.

Salzburg's 5-1 win away to Dinamo Zagreb meant a win would have been enough for Ronny Deila's Celtic to reach the knockout phase.