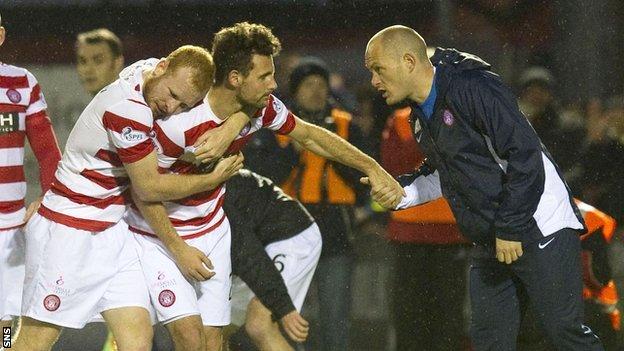 Hamilton Accies manager Alex Neil said his side let themselves down despite recovering to secure a 3-3 draw against Partick Thistle in the Premiership.

Accies surrendered a two-goal lead in the match at New Douglas Park, but with Thistle 3-2 up in injury time a late goal from Tony Andreu salvaged a point.

"That was the disappointing part."

Two goals in the space of a minute from Darian McKinnon and Danny Redmond put Accies into a first-half lead, then Grant Gillespie diverted Jordan McMillan's strike into his own net.

James Craigen and Christie Elliott gave Thistle a 3-2 advantage, but in added time Andreu popped up to lash home a leveller for the Lanarkshire side.

Despite the goal-fest, Neil felt his side should have worked harder in defence and held on to their lead.

"I don't think it was a particularly great game to be honest," said Neil. "I know six goals is exciting for the neutrals, but I don't think there was a great deal of quality in the match.

"At 2-0 we were looking comfortable and I thought we would see the game out, and then we find ourselves 3-2 down.

"We didn't look like scoring and Tony popped up with a wonder goal.

"I was pleased in the end, but disappointed in the way we let a two-goal lead slip.

"We let ourselves down, we didn't defend well enough and we paid the price for that.

"I don't think Partick Thistle created another chance outwith the goals, and we didn't create a great deal ourselves, but we still managed to score three goals.

"Normally, when you score three goals you would expect to win the game."