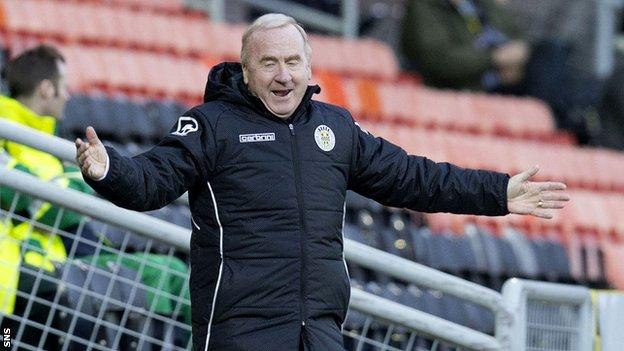 St Mirren manager Craig felt Adam Drury's miss just after the half-time interval was the turning point in the 3-0 defeat by Dundee United.

The Buddies were 1-0 down when Drury's shot was well kept out by United keeper Radoslaw Cierzniak.

"That's been the story of our season," said Craig.

"It showed itself in the space of a few minutes. We were clean through and didn't finish and then they go up the park and score, it's very frustrating."

Goals from Paul Paton, Nadir Ciftci and Charlie Telfer added to St Mirren's woes in the bottom half of the Premiership table, and Craig admits that until his players start converting chances, the club will remain among the basement sides.

"Until we consistently put the ball in the net we're always going to be looking over our shoulder," said Craig. "In a nutshell that's where we are.

"I thought going in 1-0 down at half-time was a wee bit harsh on us.

"But once United go 2-0 up they get their tails up and once it goes to 3-0 they could maybe have got more.

"I don't really know what more I can say. I think that game sums up our season so far - my main concern is getting this team to pick up points.

"It's an obvious concern to be where are just now. But we're working hard to make sure we don't get cast adrift."