MOTD2 pundit Danny Murphy expands on his TV analysis of how 10-man Manchester United almost rescued an unlikely derby draw against Manchester City, despite having Chris Smalling sent off before half-time.

Manchester City deserved to win Sunday's derby but you have to give Manchester United great credit for the way they played with 10 men.

City had been on top when it was 11 against 11 and, from their point of view, it was good to see that they maintained that level of pressure when Chris Smalling was sent off in the 39th minute.

Manuel Pellegrini's players could have been frustrated by the fact they were not awarded the penalties they should have been given with the score at 0-0.

Instead of feeling hard done by, they kept pressing forward. 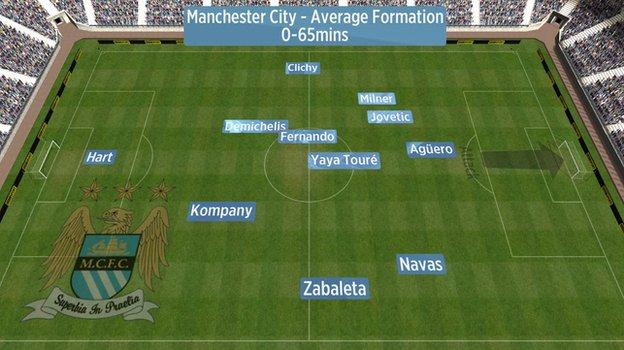 They got their reward when Sergio Aguero put them ahead with a brilliant finish, but the momentum of the game turned with that goal, which came with just under half an hour to go.

The first part of what changed is fairly obvious: once United had fallen behind and knew they had nothing to lose, they attacked with greater numbers and greater intensity in search of an equaliser.

What you might not expect, especially with them playing against 10 men, is for City to do what they did next - which was to drop deeper and deeper rather than continue pushing forward in search of the second goal that it appeared they needed to be sure of victory. 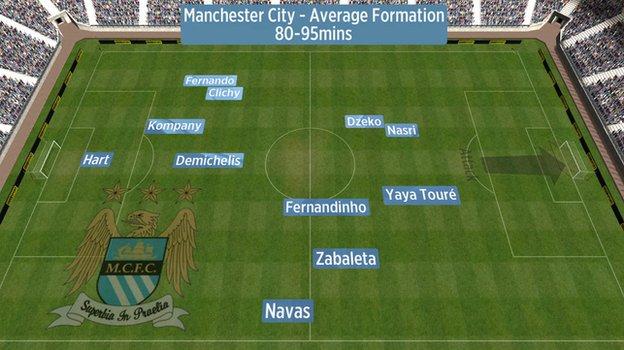 Having been in the same position myself, I would suggest City's recent poor form might have had something to do with their caution, and the fact it was such a big game.

But knowing they had an extra man would have been irrelevant.

City just wanted to protect their lead even if, by doing so, they created some problems for themselves by allowing United a foothold in the match.

I always think that when you are a man up in games the hardest thing is maintaining the same intensity in terms of pressing for the ball.

When your team has an extra man, you automatically assume that you will have more possession, even though you still need to win it in the first place. 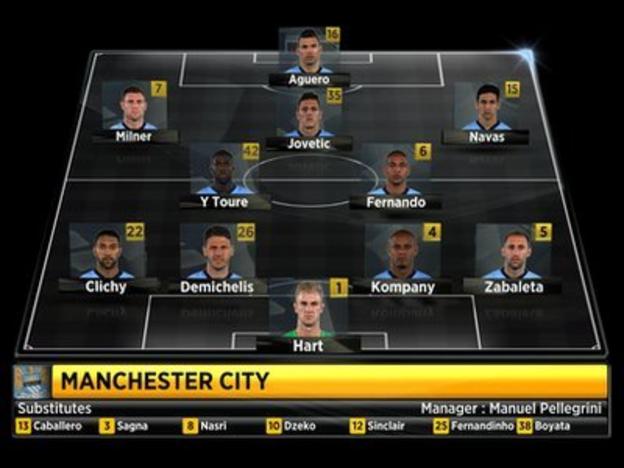 What usually happens is that the team with 10 men starts working harder than they were, so you need to do the same.

It only takes one or two players to trigger that response and get everyone else chasing the ball again instead of just sitting back, but even then, by doing that, you think you are taking a risk.

By pressing high up the pitch, you are stopping attacks at their source but you are worried about the space you are leaving behind. It is hard to change that mentality, as City found out.

Even when they did have the ball, there were other reasons why they did not just bomb forward.

If they had committed more men up the pitch in search of a second goal and got caught on the counter then everybody, including their manager, would be asking what on earth they were doing - why not just keep the ball, keep their shape and make sure United can't score?

It is a balancing act but City probably just erred on the side of caution too much in the latter part of the game and gave United confidence.

As the game drew on, they got a bit panicky with their clearances and, instead of playing the ball out from the back, they went long early. Their nerves gave United more belief.

Subs make a difference for both sides

Another way City went wrong was with their substitutions.

Pellegrini brought on Edin Dzeko and Samir Nasri with 20 minutes left when he really needed an extra man in midfield to try to get some control back.

He did eventually make the correct change, and Fernandinho did well when he came on. But if he had been brought on 15 minutes earlier, it might have stemmed the momentum that United were building. 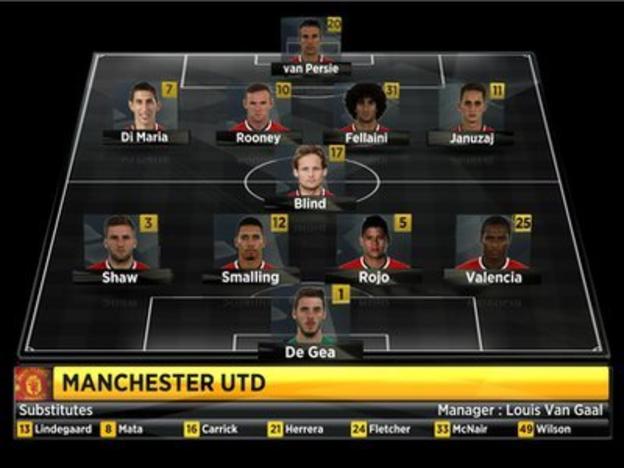 United also made the right change at the wrong time, because young James Wilson made a big difference when he replaced Robin van Persie up front eight minutes from time.

When you play one up front with 10 men, your striker has to be able to give you a get-out when you are under pressure, whether that is by running the channels or holding the ball up.

With Van Persie up front, they did not have that. He showed one bit of class in the game, with a nice turn in the corner and a shot that Joe Hart saved, but otherwise it was a difficult day for him.

He was isolated and did not have the athleticism to run the channels effectively, or the pace to out-run Vincent Kompany or even Martin Demichelis. 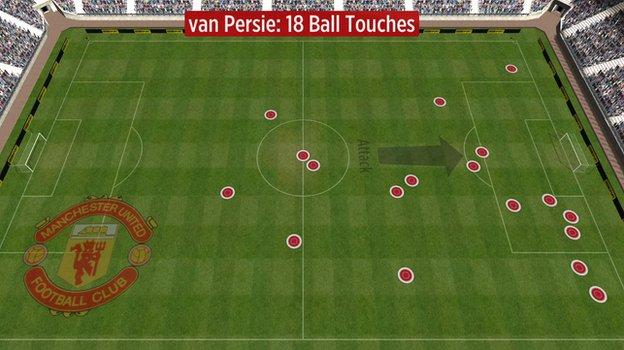 I was surprised Marouane Fellaini did not get put up there to have some battles with City's centre-halves but instead Louis van Gaal went for Wilson's pace, which stretched City and forced them even further back - maybe he should have made the change sooner.

United still had some defending to do of course, but the longer they hung in there with the score at 1-0, the more they would have believed they could still get something from the game.

That did not happen, but they can still take some encouragement, and not just from the grit and determination they showed.

Daley Blind was superb in United's midfield and showed a really calm head.

Another attribute you need when you are playing with 10 men is someone who is not worried about playing under pressure and Blind did that brilliantly at Etihad Stadium. 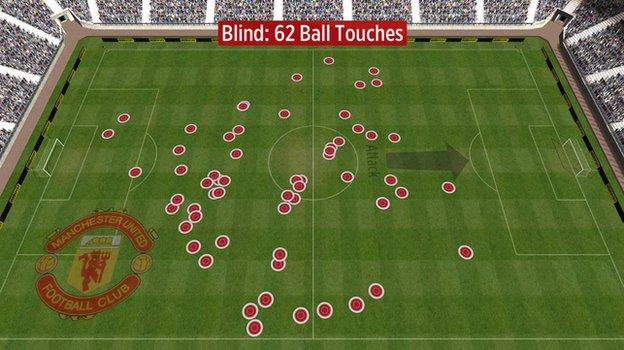 He did a great defensive job but rather than just whacking the ball out and clearing their lines until the next attack, he was trying to get them playing and taking a risk to try to build something for United to come forward.

Aguero the key for City to maintain challenge

The positives were all in the result for City. This is the start of a big week for them, and they will need a better performance to be sure of the victory they need against CSKA Moscow in the Champions League on Wednesday.

Just like in Russia a fortnight ago, they kept the ball poorly in the last 20 minutes against United and almost paid for it again.

I still think that is psychological, rather than down to any lack of ability. They were desperate for a win and now they have seen this game out, I would expect them to push on.

For that to happen, though, they need to keep Sergio Aguero fit.

He is the best striker in the Premier League and watching him against United made me think he could be the difference between them staying close to Chelsea at the top of the table, or not.

Aguero gives City amazing quality in the final third, which we saw all game. 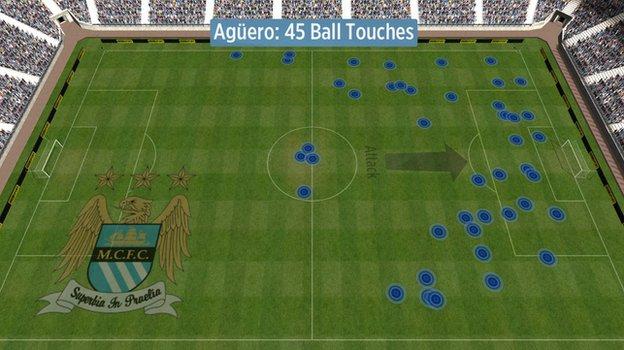 For his goal, there was his movement away from Paddy McNair to find space and then a brilliant finish to what was a difficult chance on his weaker foot.

He should have had two penalties because of his quick feet and skill and, with his movement and energy, he was a focal point for everything City did and a constant threat.

Aguero has the ability to turn matches no matter how many players teams put behind the ball.

He was frustrated to come off, but Pellegrini was right to be thinking of the part he has to play in future games, starting with Moscow on Wednesday.