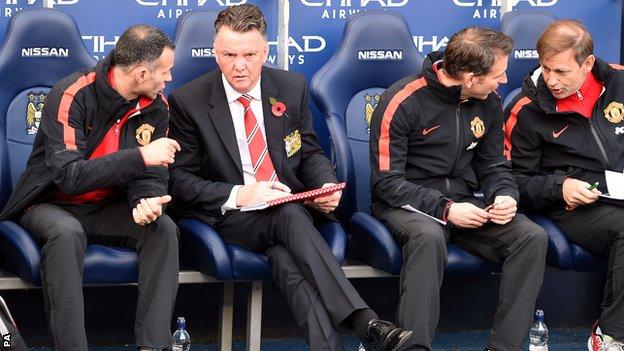 That was a sequence resulting in the end of manager Ron Atkinson's reign and ushered in the Sir Alex Ferguson era.

The season ended with United in 11th place. They currently stand in ninth position, 13 points adrift of leaders and Premier League title favourites Chelsea, having won just three times in the league.

Van Gaal admits it was "stupid" to ask observers to assess him after three months and there is no question the formidable coach who led the Netherlands to the World Cup semi-final will be given time to put his stamp on Old Trafford.

So, after 10 games and a sixth defeat in the last seven Premier League derbies, here are 10 talking points from the early months under Van Gaal.

There are few more self-assured characters in the world game than Van Gaal, his confidence and sheer force of personality a formidable ally to his undoubted coaching prowess.

If his predecessor David Moyes often seemed worn down and surprised by the sheer scale of Manchester United, Van Gaal believes this is his natural environment.

Despite a stuttering start, Van Gaal is convinced United are "close - but not close enough" to Chelsea and Manchester City after a 1-1 draw with Jose Mourinho's side and a narrow defeat at the reigning champions.

Van Gaal is a charismatic figure, brutally honest and open in his assessments.

The Dutchman praised his side's "incredible willpower" for mounting a late threat with 10 men after Chris Smalling's red card - but also had no hesitation in condemning the defender's sending off as "stupid" and "not so smart".

He is outwardly, and no doubt inwardly, as confident as ever in his approach and his conviction that he will get it right. An uncertain start has done nothing to dent that iron-clad self-belief.

Van Gaal's attempt to restructure United's squad after last season's failures under Moyes came in the shape of a £150m investment as phase one of his rebuilding programme.

No-one can deny, however, that he has been badly hampered by injuries to those he hopes would form the bedrock of his new United team.

The sight of £16m defender Marcos Rojo being taken off on a stretcher will have been another body blow to Van Gaal.

He was already without £28m midfielder Ander Herrera after a rib injury, while left-back Luke Shaw missed the start of the season and striker Radamel Falcao was missing at Etihad Stadium.

Add to this injuries to Phil Jones and Jonny Evans, while Michael Carrick has only just returned, and it is only right that Van Gaal's start must be judged in this context.

United's squad has done nothing to dispel the feeling that it is heavily front loaded - packed with attacking intent but short on the nuts and bolts of defence that can lock games down. The comparison about putting the roof on a house before the foundations were secure has been made.

Angel Di Maria and Falcao were talents that embroidered the likes of Wayne Rooney and Robin van Persie, but nothing has happened this season to reduce the urgency to buy a commanding centre-half and a midfield player of equal stature.

Is time up for England's defensive duo?

Chris Smalling and Phil Jones were put in place by Sir Alex Ferguson as Manchester United's defensive duo of the future, designed to slip seamlessly into the vacancies left by Rio Ferdinand and Nemanja Vidic.

It would be no surprise if Van Gaal was already contemplating a future without them.

As opposed to kicking on, they have regressed to the point where it is questionable whether they have the class United require.

At Manchester City, Jones, 22, was again missing through injury, this time with shin splints.

As for Smalling, 24, the resigned smile and unflattering comments from Van Gaal when asked about his daft sending off against City probably only scratched the surface of the manager's emotions.

Van Gaal arrived at United determined to introduce a 3-5-2 system but it looked like a particularly ill-fitting suit when United's players tried it early in the season.

The 4-0 defeat in the Capital One Cup at MK Dons was a particularly bad advert for the idea and Van Gaal has reverted to a more traditional back four - but again there must be understanding for what the manager has had to deal with.

Van Gaal has had those injuries to the likes of Shaw, Evans and Jones, while Rafael was out injured on Sunday. Smalling was then sent off and Rojo injured.

It would be unfair to make a definitive judgement on how Van Gaal's preferred ideas and tactics will work until he has all the players at his disposal. Not to mention one more transfer window to bring in a high-quality central defender and, perhaps, midfield man Kevin Strootman from Roma.

One of the major plus points of the early months for Van Gaal is that he can be confident he has inherited a world-class goalkeeper in Spaniard David de Gea, who turns 24 on Friday.

Gone are the uncertainties of those early months after his £17m move from Atletico Madrid in May 2011.

Then, he looked frail, jittery and ill-at-ease with the physical demands made of goalkeepers in the Premier League. Now he is a more imposing physical presence, commanding and right at the top of his game.

At City he showed lightning reflexes to save from Jesus Navas; great courage diving at the feet of Sergio Aguero, taking a heavy knock; and safe hands to save from Stevan Jovetic.

Put the package together and he is becoming the complete keeper.

Are Man Utd close to Man City and Chelsea?

Probably not - and Van Gaal may well know it but feels this is not for public consumption.

Only a last-minute equaliser from Van Persie saved them from defeat at home to Chelsea and City were deserved winners of the derby as their dominance over United continues.

It is hardly United's lot to talk up plucky draws and narrow defeats but this is an indicator of their current standing.

Van Gaal was right, though, to praise his players for sticking to their task in trying circumstances at City. They showed the guts and spirit to even threaten an unlikely equaliser in the closing moments.

But close to Chelsea and City? No, not that close.

Van Gaal has never shied away from those and will continue to make them at Old Trafford. One of the biggest he has made is the decision to appoint Wayne Rooney as captain.

Many predicted he would go for Van Persie, his captain at international level and a player with whom he has a very close relationship.

The decision to appoint Rooney will have played out well with United's squad after his decade at Old Trafford - and also any accusations of Van Gaal playing favourites to a fellow countryman.

It is too early to say whether this has been a success. Some of the risks have shown in the early weeks, such as with Rooney's red card against West Ham United.

Van Gaal knows Rooney will lead from the front and has said he will always play - but that occasional suspect self-control was again on the edge at City.

Van Gaal clearly feels he has work to do and undoubtedly has his sights set on the top four. The bonus is he will be able to spend plenty of time on the training ground at Carrington putting his plans in place.

With no European football and the League Cup gone, United only have the Premier League and FA Cup with which to contend, giving Van Gaal plenty of preparation time.

As he beds in new players, waits for injured players to return and contemplates further additions, he may well need it.

When will the honeymoon end?

This time last season, after an underwhelming start for the doomed Moyes, United were in eighth position with 17 points after a 3-1 win at Fulham, eight points behind leaders Arsenal. In other words, better than under Van Gaal.

Moyes had spent the comparatively small sum of £27m on Marouane Fellaini from Everton.

Van Gaal has 13 points from 10 games, half the tally of leaders Chelsea, despite spending £150m.

BBC pundit Robbie Savage believes Van Gaal has had an easy ride, claiming Moyes would have been "fried for breakfast" in similar circumstances.

Van Gaal, in contrast, has had little criticism and remains in good order with United's fans. That is perhaps because he is picking up the slack from Moyes' poor tenure and he is seen as a man and personality more in keeping with United's demands and stature.

By this stage last season Moyes had lost 1-0 at Liverpool and been thrashed 4-1 by City.

With that in mind, Van Gaal's honeymoon period - barring catastrophe - will last the entire season.