MOTD2 pundit and former Arsenal defender Martin Keown expands on his TV analysis of why Arsenal only have themselves to blame as they see another lead slip away in their defeat by Swansea, and what they can do to stop it happening again.

Arsenal's defeat by Swansea on Sunday means that, for the second time in six days, the Gunners have failed to see out a game when they were ahead in the closing stages.

Just like in their 3-3 draw with Anderlecht on Tuesday, when they had led 3-0, Arsene Wenger's side only have themselves to blame.

The Gunners got the balance of their team wrong in the closing stages at the Liberty Stadium. For them to throw it away after what happened in midweek was quite unbelievable.

At 1-0 up, with 15 minutes to go, when they should have been solid, they committed too many players forward.

There were seven Arsenal players ahead of the ball in the opposition's third of the pitch when Swansea broke away to win the free-kick from which Gylfi Sigurdsson scored their equaliser.

Only Kieran Gibbs was near the ball in the Swansea half, with Per Mertesacker and Nacho Monreal marking Swansea players in their own half.

It was a great free-kick by Sigurdsson to get the ball up and over the wall and down underneath the bar.

But Arsenal should not have been in a position where they gave it away in the first place. It was a problem of their own making.

What went wrong for Arsenal?

That free-kick came about after Modou Barrow ran straight down the middle of the pitch before being brought down when Gibbs had no choice but to foul him on the edge of the Arsenal area. 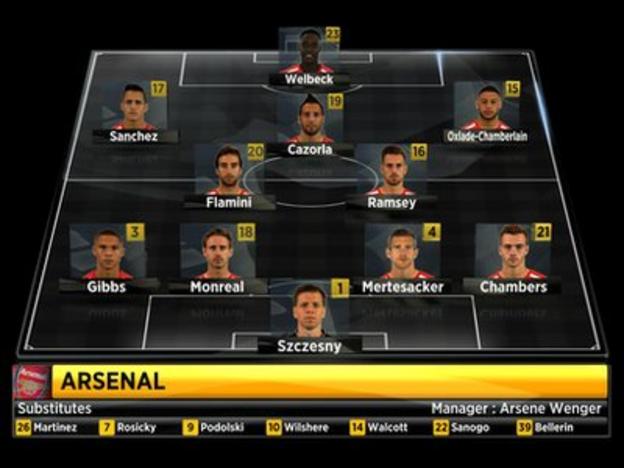 But the reason Barrow could do that was because Mathieu Flamini had moved out of central midfield to challenge Sigurdsson and try to win the ball.

Flamini did not need to do that - he just needs to occupy that central area of the pitch.

If you do that, then the opposition do not even bother trying to run into that area. But, when they can see holes and gaps, they run into them.

Flamini should have passed that player on. Instead, he vacated his area and did not have the pace to recover.

It is not all his fault, though. To an extent, the centre-halves should have communicated that they wanted protection.

Whoever I played with in the centre of defence for Arsenal, my partner and I would have the adage that, the more players do in front of us, the less we do.

So our aim was always to get that barricade in position, and keep it there.

Under Arsene Wenger, in the Arsenal team I played in, the likes of Patrick Vieira and Emmanuel Petit would not have vacated midfield in the manner Flamini did.

Swansea deserve credit for their winning goal, which was well-worked and finished but, again, it should have been stopped at source.

Again, it comes down to a defensive shield, which Arsenal used to have but are missing at the moment.

I lost count of the number of Arsenal wingers that my old team-mate Lee Dixon saw off because of the amount of work they had to do in front of him to protect him at right-back.

Perhaps now, Chambers realises what it is really all about to be a defender at this level

That is vital, because if you can stop the ball reaching the feet of the opposition winger then they are not going to cause you any problems.

Calum Chambers was not given much protection down the right by Alex Oxlade-Chamberlain and, too often on Sunday, Jefferson Montero was able to pick the ball up and do real damage.

It was almost as if Swansea were targeting Arsenal down that side because they could see that Chambers was struggling to deal with a right-footed left-winger.

As a player I see as predominantly being a centre-half who is playing right-back rather than a player whose future lies at full-back, Chambers found it very difficult against the Ecuadorian.

He did not have the pace to deal with such a nippy player over the first five yards and, with Montero being right footed, the Swansea player was knocking it out of his feet and into space that Chambers was not expecting.

From what I have seen of him this season, Chambers likes to get close to his man and put his hands on him but he tried something different against Montero and did not get the balance right.

I felt it was a big wake-up call for Chambers. Until now, everything has gone incredibly well for him over the last few months, with him flying from Southampton to Arsenal and into the England team.

Perhaps now, he realises what it is really all about to be a defender at this level.

But as well as Chambers allowing Montero to put the cross in for the second goal, Arsenal should have dealt better with the ball when it came into the box.

With Laurent Koscielny injured, I think Nacho Monreal was picked to play centre-half because Wenger wanted to use his experience and did not want to have Chambers in the centre and Hector Bellerin at right-back because he did not want two 19-year-olds together in his defence.

Maybe that is something he will have to reconsider when he looks at Bafetimbi Gomis's goal again.

Per Mertesacker gets pulled out a long way, perhaps to try to cover Chambers but he does not really need to do that and he is not marking anybody either when Montero's cross comes in.

Instead it is Monreal, usually a left-back, who is left to deal with Gomis, and he was never going to be favourite to win that high ball.

Gomis deserves credit for his finish, but with normal orthodox central defenders, I would like to think that cross is something Arsenal can deal with.

How can Arsenal improve at the back?

On the back of Arsenal seeing two leads disappear within a week, there needs to be a major inquest into why it happened.

Of course there will be more cries for Wenger to strengthen his side defensively when the transfer window opens in January.

But, before then, they need to improve in that area with the personnel they have got, which comes down to individuals as much as tactics.

Everyone charging forward for Arsenal was criminal. They paid the price.

The philosophy of the club under Wenger is always going to be to attack and try to create chances but, looking at the way Arsenal did both of those against Swansea, you could argue they did not create enough.

Mertesacker spoke after the game about how Arsenal had not kept possession well enough in the closing stages.

The reason that was their downfall was that they were not prepared for when they lost it.

As a centre-half, Mertesacker has to organise the players in front of him. You cannot just switch on the second you lose the ball - instead, you should be in a position to win it back early.

You have to prepare for the worst, otherwise you are not going to be ready when you lose possession.

That is something you don't have to train at, it is a mindset you go on to the pitch with, and you have to have players who take responsibility at key times.

Even before Swansea's equaliser, it was already a feature of Sunday's game that Arsenal were being a little bit sloppy in possession.

That could have been down to the wet conditions and torrential rain, but they were not keeping the ball like they normally do.

So, the key was not to run the risk of leaving themselves isolated and exposed at the back.

Arsenal did that for Swansea's first goal, when there was a huge gap between their defence and midfield.

Everyone charging forward meant only Gibbs and the two centre-halves were in contact, which was criminal. They paid the price.