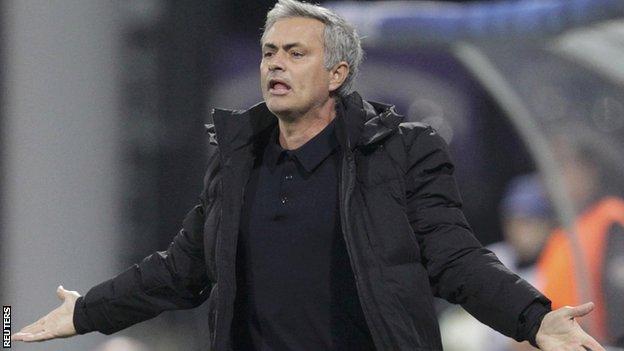 Jose Mourinho accused his Chelsea players of complacency after they were held to a 1-1 draw by Slovenian minnows Maribor in Champions League Group G.

The Blues went behind to Agim Ibraimi's goal but Nemanja Matic equalised before Eden Hazard missed a penalty.

"Many times surprises happen when people are not fully focused, when they believe the game can't be a difficult one," said Mourinho.

"Only when Maribor scored did the players realise the danger."

The result leaves Chelsea three points clear in Group G, needing to win one of their remaining two matches to guarantee qualification to the knockout phase.

And despite having talked up his opponents in the pre-match news conference, Mourinho admitted he must take some of the blame for his players' attitude in a lacklustre first half.

"If I cannot convince the players that the game is difficult and you have to play from minute one, obviously it's my responsibility," he said.

The Blues were denied a penalty early in the second half when Oscar appeared to be tripped and his fellow substitute Diego Costa had a goal wrongly ruled out for offside.

Mourinho hinted that he had history with Orsato from his time at Inter Milan, adding: "We scored two goals, two very good goals. The second goal, the referee decided to disallow but it's a clear goal.

"Normally we should win because we scored two goals. But we have to accept it.

"The referee's team did not have a good night."