Celtic striker John Guidetti has been awarded the Scottish Professional Football League Premiership player of the month award for October.

The Sweden international arrived at Celtic in the summer on loan from Manchester City and has scored six goals in four games during the month.

He is ineligible to play in Celtic's Europa League group campaign due to a delay in processing his transfer.

However, if Celtic progress to the round of 32, he can be registered to participate in any matches which may take place in 2015.

Deila has previously said he wants Guidetti to become a Celtic player permanently "as quickly as possible".

The 22-year-old Sweden international is currently on a season-long loan, but his contract at the Etihad stadium expires in the summer and while he still sees himself as a City player, he is focused on his current role at Celtic.

"It's something I have to look at of course," said Guidetti.

"But I'm trying to stay focused on my football. I've just got to keep doing well. What happens next year, we take next year.

"I have a lot of things coming up and great things to look forward to. We have the Europa League and hopefully we'll go to the finishing stages of that.

"I don't want to look ahead too much, because sometimes if you look too much ahead you're missing on the good bits that are happening right now. 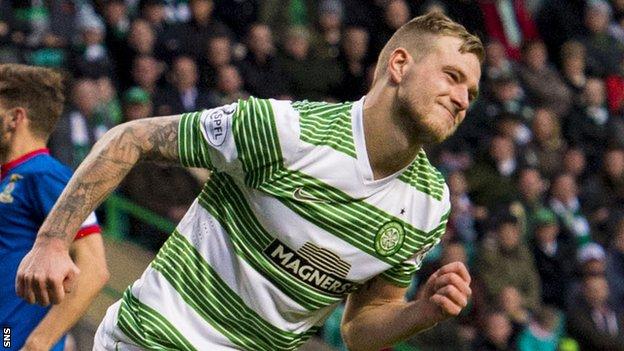 "If Celtic and them are talking, it's very good. I trust them and they've said to stay focused on my football, there's nothing for me to worry about.

"If I keep doing well, that's all I need to worry about."

Guidetti was flattered to receive the monthly award, and insisted it was down to Deila and Celtic for giving him a new lease of life after a prolonged spell out injured with Manchester City.

"I have been given an opportunity, and I play with great players in front of amazing fans, who help me," said Guidetti.

"The manager believing in me, giving me an opportunity. It didn't go so well for two years, but the reason was because I was injured - not because I was playing badly.

"When the opportunity was given to me, I took it and I'm trying to do my best. I don't see the two years as me playing badly and not doing well, because injuries happen in football and there's nothing you can do.

"It made me stronger and built me as a person and made me a better footballer, so much more grateful for being in the position I'm in today and to be able to play football.

"It's fantastic here - I can't complain.

"I'm playing in one of the biggest clubs in the world and it's an absolute pleasure and honour to put on the Celtic jersey."