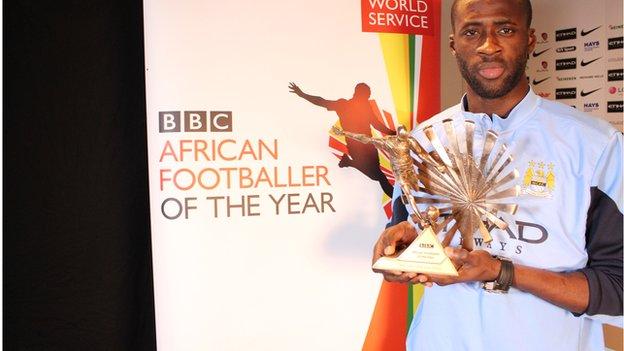 It's that time of year again: when Africa's top footballers wait to find out if they have made the shortlist for the BBC African Footballer of the Year.

On the morning of 10 November, the BBC will unveil the five names in the running for the 2014 prize on the World Service's early morning Newsday programme at 0555GMT.

The public will then be able to vote online via the BBC Sport pages and via text.

Once again the shortlist is guaranteed to generate interest and debate after an exciting year for African football that saw two teams from the continent progress to the second round of the World Cup for the first time ever.

Now in its 23rd year, the BBC has been recognising and rewarding the very best of Africa's sporting talent since former Ghana captain Abedi "Pele" Ayew won the first award in 1992 when it was known as the African Sports Star of the Year.

Since then, the cast list of former winners has been a who's who of Africa's sporting and footballing heroes and reflects the changing face of the game on the continent and beyond, its influences and its progress.

The brilliance of early winners like Ayew, George Weah and Nwankwo Kanu led to a greater interest in African footballing talent - and an explosion of Africa's international stars into the main leagues of Europe in the early 1990's.

Now it's difficult to find a major championship without its constellation of African stars and that will once again be reflected in this year's shortlist.

The nominees have been drawn up by African football experts from across the continent but once again the final decision will be down to a public vote by fans from around the globe.

The voting will close at 1800GMT on 24 November whereupon we will tally up the results and check them before handing over the prize to the winner on 1 December.

African Sports Star of the Year

African Footballer of the Year