In his regular BBC Sport column, football pundit Robbie Savage looks at why Liverpool look a long way off repeating last season's title challenge, how they should line up against Chelsea and the physical and mental battle Steven Gerrard faces to secure a long-term future with the Reds.

Chelsea's return to Anfield on Saturday brings back unhappy memories for Liverpool and their immediate future is not much brighter either.

It is only six months since Steven Gerrard's slip helped the Blues clinch a famous win on Merseyside that derailed Liverpool's title bid.

Back then, at the end of April, the title was in the Reds' grasp. This weekend, I think we will see again how far away they are from mounting another title challenge.

They are miles away from the level required for that, and will have to improve and work hard just to get in the top four.

If they manage it, then securing back-to-back seasons in the Champions League should be seen as success for Liverpool boss Brendan Rodgers.

But not all their fans see it that way. I had some unhappy Reds supporters calling me up on 606 on BBC Radio 5 live last weekend to give their manager stick.

Goals are not easy to come by

Part of Liverpool's problem is that they overachieved massively last season, which has raised expectations unrealistically. That is not Rodgers' fault.

Where he can be questioned is in the transfer market, especially up front.

With Suarez sold and Sturridge playing only three out of 10 league games so far this season because of injury, Rodgers has lost a lot of goals from his line-up.

But he has had money to spend and I do not think he has bought the right strikers to fit his system.

Looking at Rodgers' options up front for Saturday, Mario Balotelli, Rickie Lambert and Fabio Borini are his three available front men, and the bottom line is that they are not good enough.

It is not just that they do not look like scoring. There is a big difference in their work-rate compared to what Suarez and Sturridge gave the team.

That means Liverpool are not starting games with the same intensity they did last season, or pressing teams high up the pitch to force them into mistakes.

Doing that in 2013-14 Liverpool scored 59 first-half goals, 13 more than any other team, and scored in the first half of 34 out of 38 league matches - again the most in the top flight.

In their first 10 games of this campaign, they have only managed a total of four goals before half-time, in three different matches. Instead of being on the front foot, they are having to chase games.

They look pedestrian and that is not just the centre-forward's fault.

When I have watched them, no matter what formation they play, they do not seem to have any runners going past their striker from midfield.

Again, last season that used to happen all the time, but I was at St James' Park last weekend to co-commentate on their defeat by Newcastle, and the only player to run beyond Balotelli in the first half was Gerrard, who did it once.

Another problem is set-pieces. Liverpool were lethal from them last year, scoring with more than any other top-flight team.

More than a third of their goals in 2013-14 came from corners or free-kicks, at a rate of almost one a game. That has dropped off dramatically.

Sadly for Rodgers, seeing the goals drying up is not his only problem.

Liverpool's defence was seen as their weakest link last season and, despite trying several different combinations, he did not get it right.

From Mamadou Sakho for £18m in 2013 to Dejan Lovren for £20m this summer, Rodgers has thrown a lot of money at the problem but is still trying to find an answer.

They still look all over the place at the back.

Statistically, they are no worse defensively than last season - but they are also no better.

Liverpool play and complete as many passes as before, and also keep as much possession. But with them no longer being able to outscore the opposition, it is no surprise their results have been affected.

What Liverpool lack at the back is a leader, and their goalkeeper does not give them much help there.

Simon Mignolet is clearly an excellent shot-stopper but I don't see him coming off his line enough, or commanding his box.

Rodgers tried three at the back against the Magpies, but I cannot see him doing the same against Chelsea.

He was criticised for resting players against Real Madrid on Tuesday but I agreed with him for doing it.

Liverpool can still qualify for the knockout stages in Europe if they win their last two games in Group B and their weakened team actually did better against Real in Spain than the full-strength side he picked at home.

Now he has to decide who to play against Chelsea, but whoever he picks, Liverpool will need to show a huge improvement on their recent displays. 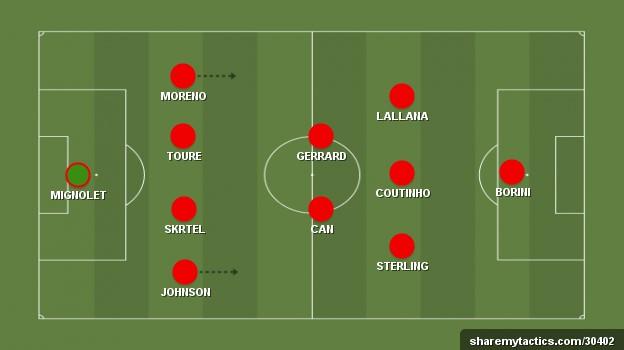 For me, Lovren is the big signing who makes way, with Kolo Toure keeping his place after doing well at the Bernabeu.

It is a big call to drop Lovren when Rodgers has spent so much money on him, but he has just not been good enough.

He was poor against Newcastle and has been poor all season.

Although he has got the height that Liverpool will need to defend set-pieces against Chelsea, I saw him get bossed around by Bobby Zamora when Liverpool played QPR at Loftus Road. You have to think that Diego Costa would make mincemeat of him if he is up front for Chelsea.

To compete, Liverpool will need a solid four in the middle, with their full-backs looking to join the attack.

Whether it be Glen Johnson on the right or Alberto Moreno on the left, when one goes forward, then the other should sit back.

That way, Liverpool will always have five defensive players to guard against Chelsea's counter-attacks.

Going forward, they need their full-backs to contribute in the same way they did last season when they overlapped down the flanks or broke forward with speed.

The trio of Adam Lallana, Philippe Coutinho and Raheem Sterling as attacking midfielders provide pace, trickery and creativity and, leading the line, Borini gives more energy than Lambert or Balotelli.

He will have to work hard down the channels to keep Chelsea's defence busy.

Even if all of that works, however, it is still hard to see Liverpool winning on Saturday because Chelsea are on a different planet to every other Premier League team at the moment.

Jose Mourinho's side have not been at their best in the last couple of games but they have not lost any of them either.

The only way you would describe their form as disappointing would be in comparison to the way they started the season, when they were electric.

The Blues do not seem to have a weakness and, just like in April, I see them leaving Anfield with three points.

There is no title on the line this time, but it will still hurt the home fans.

Gerrard faces physical and mental battle to carry on

Whatever happens on Saturday will not make up for what was probably the worst moment of Gerrard's career. He may never make up for it, but there is no way he is finished.

He was Liverpool's best player against Newcastle and, despite it still being uncertain whether he will get a new Reds contract in the summer, I definitely see him as being part of their longer-term future.

Playing in that defensive midfield role, he can remain competitive in the Premier League. I cannot see him being allowed to leave Anfield but, if he does, he will end up at another top club.

The older you get, the harder you have to work, though, and extending his career will be a mental battle as well as a physical one.

At 34, he does not have to prove he can ping a ball 60 yards, deliver a great free-kick or make a crunching tackle.

What he has to show is that he can still get about the park well enough to do all of those things effectively.

Because, whether he likes it or not, every time he has a bad game he will hear the accusation that "his legs have gone".

Of course he is still fit and can still run. He is probably one of the fittest players at Liverpool. At 36, when I was at Derby, I was still in the top two or three players whenever we did the bleep test.

But it is the recovery that will test him. When you are flying, you can close someone down, then charge into the next challenge or situation.

As you get older, it is harder to get to the next man in time to make a difference. That is what people mean when they say your legs have gone.

There is nothing worse as a high-energy midfield player to know that, two or three years ago, you could have made that next challenge - and now you can't.

I knew it when it happened to me. I would try not to think it but you cannot escape it and it was horrendous. I began to doubt myself and whether anybody would want me to play for them.

What does not help is what other people say. Managers and players told me I was finished but I had to keep believing in myself.

I knew I was not the player I was, but I still felt I had something to offer.

For me, Gerrard undoubtedly does too. Along with Sterling and Sturridge he is still one of Liverpool's most important players.

Of all the players I faced in my career, he was the one I would have loved to have played with.

He was a nightmare to play against because he had everything. At his peak he was the best midfielder the Premier League has seen.

Saturday will be a difficult occasion for him because what happened against Chelsea last time probably destroyed him on the inside.

Of course he will be thinking about it before the game - he must think about it all the time - but he has not let it stop him.

It would have been easy for him to quit after a disappointment like that, but he has kept going like he always does.

It is that kind of desire that will keep him going beyond the end of this season too.