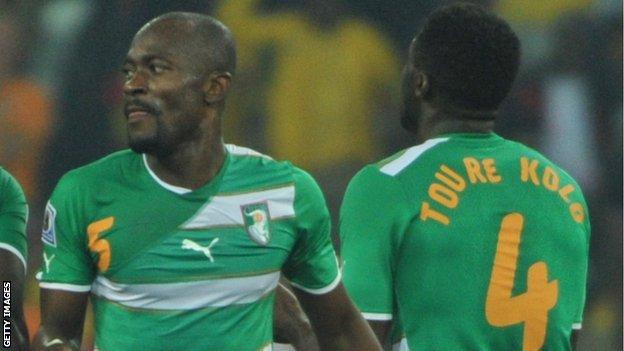 Neither defender has featured for the Elephants in the 2015 qualifiers so far.

The Ivorians are third in Group D ahead of the ties against Sierra Leone on 14 November and Cameroon five days later.

Both matches will be played in Abidjan as Sierra Leone are unable to host their tie due to the ongoing Ebola crisis in their country.

However there is no place on the 24-man list for CSKA Moscow's Seydou Doumbia.

The striker has scored six goals in the Russian league this season to help his side to second in the table after 12 matches.

He has also impressed for CSKA in the European Champions League, twice helping them to beat English champions Manchester City in recent weeks.

Monaco striker Lacina Traore is included in the squad for the first time since a 2014 World Cup qualifier against Senegal in October last year.

Traore is yet to score for his French side Monaco this season, having played just four matches this season for them.

In their last qualifier, the Elephants slumped to a shock 4-3 defeat in Abidjan at the hands of DR Congo.

That result gave the advantage to the Congolese thanks to having scored more away goals in the head-to-head matches between the two sides.

Defender Franck Kessie is suspended for the last two ties after following his dismissal against DR Congo.

Cameroon top the group with 10 points, four ahead of both Ivory Coast and DR Congo - with only the top two sides guaranteed to qualify for the 2015 Nations Cup finals.