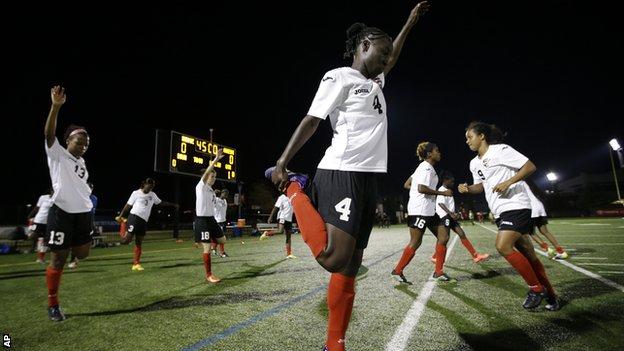 While the great multi-billion dollar debate about Qatar 2022 and a winter World Cup schedule rumbles on, qualification for the upcoming women's edition of the greatest show on earth appears to take place in a parallel universe, where teams can arrive to compete without enough money for lunch.

This weekend the play-offs for the final two places for Canada 2015 begins.

For a small group of athletes from Trinidad and Tobago the long, winding and beguiling attempt to make history by representing the Caribbean at the Women's World Cup takes them to Quito, the capital of Ecuador, some 2,800 meters above sea level.

It's a notoriously difficult place to try to play football for those not used to the conditions.

The Atahualpa Stadium, named after an Inca prince, has proved a troublesome venue even for South America's traditional powerhouses.

Brazil and Argentina have suffered some notable shocks in the thin air. Fifa at one point went as far as banning international football at the highest altitudes, with president Sepp Blatter suggesting in 2007 it was "not healthy or fair."

Quito is three times higher than the tip of the tallest mountain range in Trinidad. The Trinidad and Tobago women's team are not, though, of a mind to be intimidated by challenges. Even getting this far in search of World Cup qualification they have had to demonstrate remarkable resourcefulness.

Last month they arrived in the United States for the final round of the qualification campaign without enough funds to even take care of themselves, never mind take part professionally.

Their American coach, Randy Waldrum, took to Twitter in search of assistance.

"I need HELP!" he wrote. "T&T sent a team here last night with $500 total. No equipment such as balls, no transportation from airport to hotel, nothing. I don't know how I'm going to feed these players starting at lunch! If you know of anyone in Dallas area that will help with food, etc. Please let me know asap! And I'm supposed to qualify this team for a World Cup! I have to help these players somehow...they deserve better."

The response from the football community was astounding.

A website devoted to women's football in North America, keepernotes.com, took up the cause and set up a fundraising page. Before long, $17,000 poured in.

Most remarkably, the Haiti women's team - opponents of Trinidad and Tobago in qualification - emptied half of their bank account to help (the money was repaid once Waldrum's team were able to pay their way). Donations also took the form of meals, snacks and cold weather gear.

One day after his plea, Waldrum returned to Twitter to try to express his gratitude. "Overwhelming response to Trinidad WNT today. Humanity exists & I'm so proud of the way the soccer community came to our rescue."

Shaka Hislop was Trinidad and Tobago's goalkeeper at the 2006 World Cup. The former West Ham and Newcastle player, all these years later, struggles to find the words to fully express how it felt to hear his national anthem playing on the grandest of football's stages. "To have a good seat for it, as I put it, you just can't explain it," he says.

He knows more than most what is going through the minds of the T&T women's team right now.

He has mixed feelings - pride in the team's efforts and on the other hand disappointment of how difficult it is for them to thrive. "To see a tweet go out, and to see it go viral, was embarrassing for me as a fan and as a Trinidad and Tobagoan," he says. "It was very frustrating."

Hislop recognises how the team have been spurred on by adversity, and they are currently the biggest upward movers in the Fifa rankings.

"The situation gave a bit of a siege mentality," he says. "It gave the girls real belief in their coach and how much he was fighting in their corner. Even with good results, even if we do qualify for the World Cup, sending the girls to the US to the training camp with 500 dollars? I find that inexcusable.

"Ever since Jack Warner [Trinidadian politician and discredited former Fifa vice-president] stepped down, the current administration inherited grave financial straits. They still have a lengthy list of creditors, a rising bill, and no corporate sponsorship so that's a challenge.

"The issue the women face is not unique to them. All the teams, including youth teams who have competed in various tournaments this year, have had to endure, and somehow make their way around."

While the generosity and rallying makes for a heart-warming story, the flipside is a situation where international teams are so critically under-resourced.

Fifa's Financial Assistance Programme is available to all member associations. A $250,000 budget is allocated, and there is a requirement for 15% of that to be put into women's football.

That amounts to $37,500 dollars per year, or a little over £23,000. For everything. The entire women's game - administration of a league, salaries for coaches, facilities for training, perhaps some kits and boots or expenses for girls to go somewhere to play. It is not exactly a fortune.

Fifa announced recently it would double its funding for development of women's football from 2015. It's latest estimate is that 29m women and girls worldwide play the game. Of course every little helps. But for a little perspective, it makes the £16m Fifa recently put into a movie about its history, United Passions, seem like a fairly gratuitous use of funds.

Coincidentally, shortly after the publicity generated by Waldrum's tweets, the Trinidad and Tobago Sports Minister, Rupert Griffith, announced that money would be miraculously made available for Trinidad and Tobago's Soca Princesses.

"Cabinet has decided to provide them with an incentive of $50,000," he said. "Not just the players, but those who are managing. We are very pleased and I am sure that the national community will be very happy to find out that our women are playing their hearts out and making us proud."

If they get to the finals, Fifa take care of the bulk of the costs. Air fares to Canada and bed and lodging for a party of 35 delegates is covered. Laundry is also included for match kit and one set of training kit per day, plus a team bus, a minivan and a luggage vehicle.

The Soca Princesses performed so courageously in the Concacaf qualification series they are in good shape as well as good heart as they head into the play-offs.

They only lost one game in normal time, and that a narrow 1-0 defeat to the USA - the number one nation in women's football and a team that has grown from a strong infrastructure.

Hislop hopes that if the Soca Princesses make it past Ecuador - the second leg of their play off takes place on 2 December at home in Port of Spain - it will be the booster to enhance facilities outside of the major nations.

"It would be a huge stride forward for the women's game," he says. "Until recently there was no women's league at all in Trinidad. Before that it was pretty much limited to wherever you can find a game with a boys team who maybe would have you.

"If you proved worthy, if you were good enough, a lot of the girls have gained scholarships to the United States to advance their own careers and education. But even so, without there being a recognised league at all for squad players that was a challenge.

"As important and big as it has been in other Concacaf regions, notably the United States, it has not trickled down at all to the Caribbean and Central America. I have experienced this first hand in Trinidad.

"I have daughters who play soccer. I understand the importance of it not just as a spectacle but for the girls themselves and women's sport in a broader note. They have done a very good job in highlighting some of the issues and some of the values that comes with it."

As they arrived in Ecuador on the back of an acclimatisation camp in Mexico, the Trinidad and Tobago team were focusing only on the mission ahead.

"These past few weeks have been like no other," says midfielder Dernelle Mascall.

"The core players of this team have grown together through the ranks, so we know each others stories. But what really sets us apart from past senior teams is that vehement desire. We all want to qualify and we all believe that this is our time to qualify and that is the greatest asset of this team.

"I've experienced the game's transformation; evolving from the individual 'pass the ball to her' to what it is now strategy and tactics. Despite the evolution, football remaining the same for me - it's my refuge.