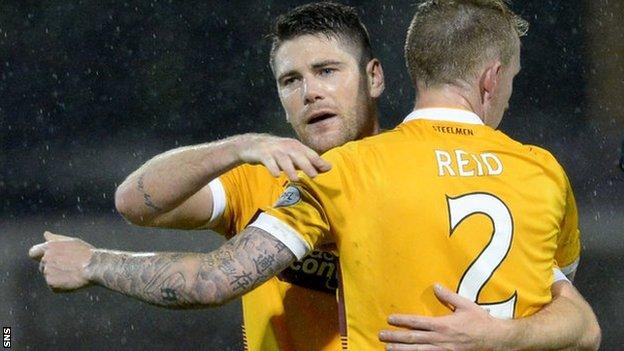 Motherwell caretaker Kenny Black was giving little away about his future intentions while relishing victory over Premiership leaders Dundee United.

Black had said he would decide whether to apply for the job vacated by Stuart McCall after his first match in charge.

"Nights like this you enjoy," he said after the 1-0 win at Fir Park.

"But I am not privy to the applications that have been sent in and the board of directors' thought process. They might have someone lined up just now."

Black, who had a previous spell as manager with Airdrie United, talked enthusiastically about building on the victory after the forthcoming break for international football.

"All I can do is do the job I'm doing until I'm told differently," he told BBC Scotland.

United dominated the first and had the better chances until Iain Vigurs scored the only goal of the game shortly after half time, but Black was full of praise for his players.

"I thought, for sheer endeavour and determination, we thoroughly deserved the three points," he said.

"We probably rode our luck at times - Dundee United had a lot more possession than we did and they've got some fantastic players out there.

"But, for sheer guts, I couldn't be more proud of them.

"Certainly in the first half, they had by far the better chances than we did, but I was happy with the application."

It was Motherwell's first win in eight matches, having lost their last five, but Black said he and McCall had seen signs of improvement before the win over United.

"He will be a proud man I imagine watching on the box tonight," said the caretaker. "He sent me a lovely message before the game.

"I'm not going to say it was for him because I think that's false, but he knew the capabilities of these players.

"I saw signs of it in the last couple of weeks although we lost, but it was a marvellous performance.

"They have laid down a marker now. Stuart and I have know for some time that these players are capable on their day."

Lionel Ainsworth looked to have extended Well's lead only to be pulled up by a contested offside flag.

"I'm led to believe the goal from Lionel Ainsworth was onside, but these things happen in football," added Black. "Although I might have been saying something different if we had lost."