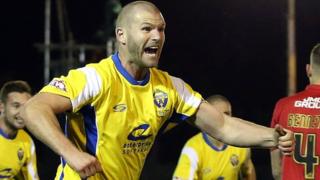 Non-league Warrington Town stun League Two side Exeter City 1-0 to reach the second round of the FA Cup.

The Northern Premier League North side, four levels below the League Two team, were in the first round for the first time in their 64-year history.

Defender and plasterer Craig Robinson headed in the winner on seven minutes.