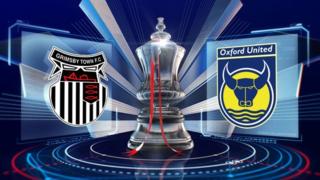 Teenage striker James Roberts marks his first start for Oxford with two goals as they cruised into round two of the FA Cup at Blundell Park.

Lenell John-Lewis hit the post with a left-foot shot as Grimsby, unbeaten in seven games, made a bright start but Roberts found the corner after cutting in from the left and tapped in another after Alfie Potter's shot was saved.

Danny Rose sealed the win when Grimsby failed to clear a cross before Shaun Pearson hooked in a late consolation.

EFL: Preston 3-1 up at Bournemouth as Sinclair scores from 40 yards