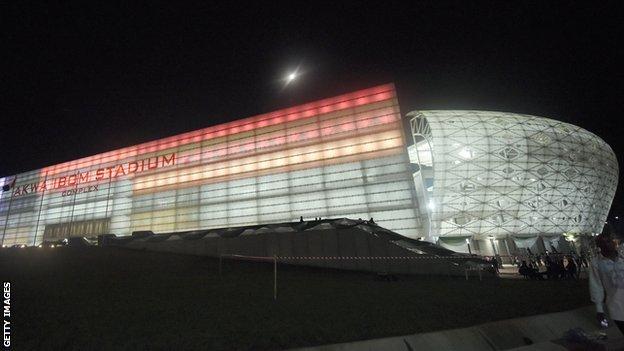 The Nigeria Football Federation (NFF) has confirmed the African champions will host Brazil in a prestigious friendly in March 2015.

The NFF says the game against the five-time world champions will be on 29 March at the new Akwa Ibom stadium, that was opened on Friday.

"We began plans as soon as the new executive committee came on board and the arrangement is finalised now."

A friendly between the two had been scheduled for September 2012 at the Abuja National Stadium, but never materialised.

There's no contract offer at the moment, it could be revisited at the end of the Nations Cup qualifiers.

The two sides have only ever met once in the past and that was a friendly in 2003 in Abuja with Brazil emerging 3-0 winners.

The new 30,000 capacity stadium, in the south eastern city of Uyo, will host Nigeria's final 2015 Africa Cup of Nations qualifying match against South Africa on 19 November.

But Akwa Ibom governor Godswill Akpabio said at the opening of the stadium in the state capital insisted this friendly will happen.

"Brazil will field the full complement of its stars for the match, including Barcelona star Neymar," said governor Akpabio.

While Pinnick also added that Ukraine and Serbia are also being considered for friendlies next year.

Meanwhile, BBC Sport understands that re-appointed coach Stephen Keshi has not yet been given a new contract by the football authority.

"There's no contract offer at the moment, it could be revisited at the end of the Nations Cup qualifiers," an NFF official told BBC Sport.

"The decision to allow him finish the qualifications came from above [the presidency], he is working based on a previous arrangement agreed after the World Cup."

The 52-year-old had paid the price for poor results in qualification for next year's Africa Cup of Nations but was given a chance to make amends following the intervention of Nigeria President Goodluck Jonathan.

Nigeria face Congo and South Africa in later this month, needing two wins to stand a chance of making it to the 2015 tournament.