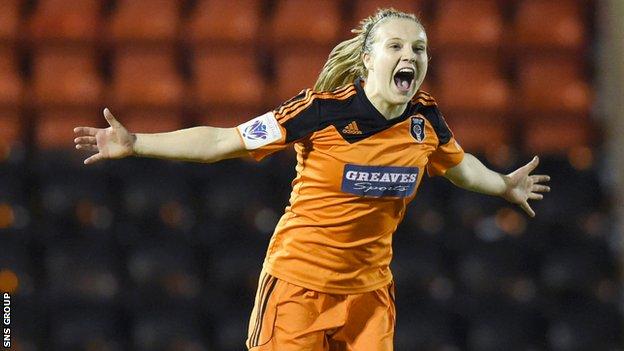 Glasgow City lost 2-1 to Zurich in the first-leg of their Champions League round of 16 tie.

Fabienne Humm broke clear to lob Lee Alexander after 10 minutes, although the keeper saved a Marina Keller penalty on the stroke of half-time.

Fiona Brown levelled with a fine finish but Julia Stierli nodded the hosts ahead again from a free-kick.

Nicky Docherty was sent off for second booking and Brown was stretchered off as City hung on to stay in touch.

Brown will be a doubt for Wednesday's return game at Airdrie's Excelsior Stadium, while Docherty and Julie Nelson miss out through suspension.

Zurich had breached the visitors' defence, with Alexander saving well from Barla Deplazes, before Humm stole away to net the opener.

Nelson then brought down Humm just inside the box but Alexander made an excellent penalty stop to deny Marina Keller.

Early in the second half Brown delivered an impressive equaliser, cutting in from the left to find the top corner with a powerful shot from 18 yards.

However, Zurich regained the lead on 59 minutes when Stierli headed home a free-kick swung into a congested area from the right.

With 14 minutes remaining, Docherty received her second yellow card and Brown's injury added another late sour note for the visitors.