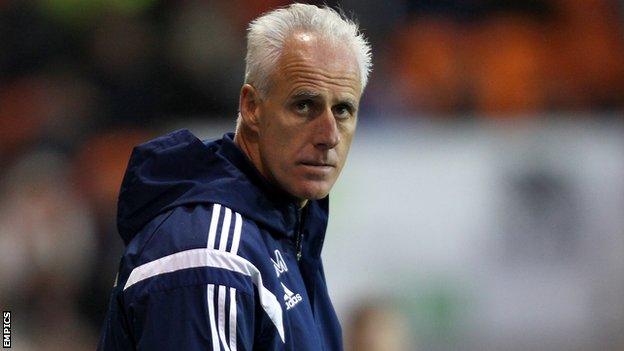 Ipswich Town boss Mick McCarthy has called for more backing from fans when the team are not at their best.

Town have won their last three games, but there were grumbles after a 2-2 draw with Huddersfield two weeks ago.

"I get people's frustration and annoyance when you give up a two-goal lead," McCarthy told BBC Radio Suffolk.

The draw with the Terriers at Portman Road on 25 October meant Ipswich had gone five games without a win - although four of those results were draws - and were down to 10th in the table.

Since then, the Suffolk side have beaten Blackpool, Wolves and Watford, and are now fourth following Saturday's 1-0 win over the Hornets.

"We've had a good week haven't we?" added McCarthy.

"We're all in it together and you stick with us. In doing that you have a chance of being successful.

"I'm not having a go at anybody, I'm just saying that's how you create an environment where you're hard to beat."