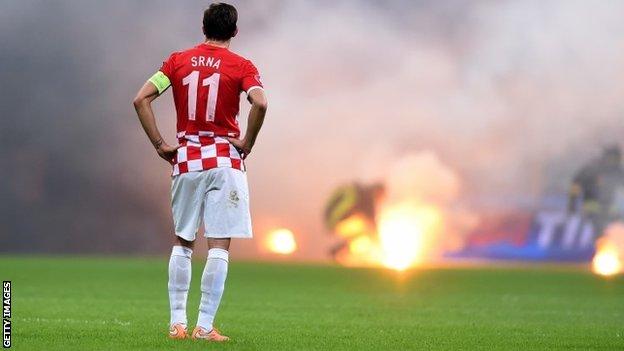 The Euro 2016 qualifier between Italy and Croatia was interrupted on two occasions when flares were thrown on to the pitch and riot police intervened to control disturbances in the crowd.

The Group H match, which ended 1-1, was stopped in both halves, with players taken off for 10 minutes after the break by referee Bjorn Kuipers.

Croatia and Italy are on 10 points, but the Croats lead on goal difference.

In the other game in the group, Malta, who had failed to score in their previous six matches, recorded a 1-1 draw in Bulgaria.

Clayton Failla equalised from the spot in the second half to earn the Maltese their first point of the campaign.

Czech Republic are in pole position in Group A following a 2-1 victory over Iceland.

A 61st-minute own goal by winger Jon Dadi Bodvarsson helped the Czechs maintain their record.

Turkey recorded their first three points in the group with 3-1 win over Kazakhstan. Burak Yılmaz scored twice in the victory in Istanbul.

In Group B, Israel strode to top spot with a 3-0 win over Bosnia-Hercegovina.

They are now a point clear of second-placed Wales, with World Cup 2014 side Bosnia-Hercegovina with only two points from four games.