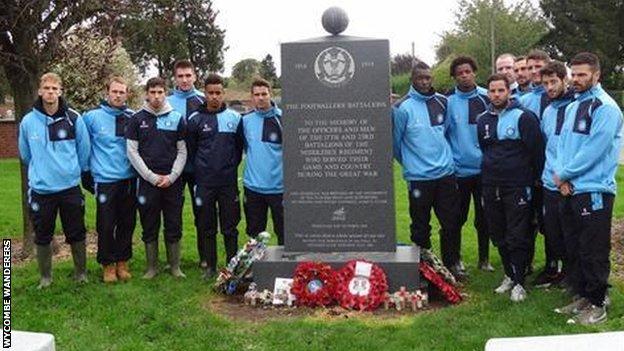 Every now and again in life, you are presented with a wonderful opportunity.

A couple of weeks ago, the players and staff at Wycombe Wanderers were given such an opportunity when we went to northern France to learn about, and pay our respects to, the fallen soldiers of World War One.

Our trip was guided by Phil Stant and Andrew Riddoch.

Phil is ex-military who, after serving in the Falklands war, went on to have a long professional football career and briefly played alongside our manager Gareth Ainsworth at Lincoln City.

Andrew is the author of When The Whistle Blows, a book about the professional footballers who served and fell during WW1.

One of the main aims of our trip was to learn and understand all about the footballers' battalion.

People, mainly newspaper journalists, were not impressed that players were running around on a football pitch while the country was at war and the pressure started to grow for these young, fit men to join up.

It was also thought that if the footballers did so, then fans would want to follow suit and serve alongside their heroes.

Wycombe's James McDermott was on holiday in Folkestone when war broke out, but came home the next day and it seems the togetherness of joining up with team-mates appealed to players.

The battalion, also known as the 17th Service Battalion of the Middlesex Regiment, was formed at Fulham Town Hall on 12 December 1914 and was later involved in the Battle of the Somme among others.

We stood exactly where the trenches were when the soldiers, at 7:30am on 1 July 1916, went over the top to near certain death.

Phil and Andrew were painting the pictures in our mind's eye and you could feel the emotion within the group. I felt like I could almost see the soldiers and hear the gunfire.

We also visited The Thiepval Memorial which commemorates 'the missing of the Somme', more than 72,000 British and South African soldiers who were killed between 1915 and 1918, but have no known grave.

I'm still having trouble trying to comprehend the sheer extent of loss of life. Graveyard after graveyard is dotted along the roads in the Somme area.

Phil and Andrew were absolutely fantastic guides. Their enthusiasm and knowledge was not only extremely impressive, but it drew us in and gave us knowledge and a real experience.

The trip was a deep and emotional couple of days, and everyone will have taken away a different and personal experience.

It has changed the way I view many things, Remembrance Sunday has always been important in my family, but it certainly meant a whole lot more to me this year and I visited the Tower of London on Sunday evening to see the ceramic poppies and pay my respects.

The standout moment of the trip for me was when we had our own private service at the memorial of the footballers' battalion.

During the service I was asked to read the Kohima Epitaph and these words will stay with me forever:

"When You Go Home, Tell Them Of Us And Say, For Their Tomorrow, We Gave Our Today."

The footballers who fought in the battalion are true heroes. They deserve to be remembered.

These guys gave their lives for us to enjoy ours in peace.