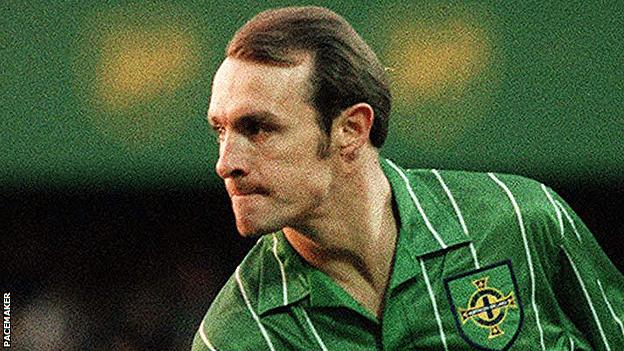 And while many fans will immediately recall Quinn's superb strike in a highly charged World Cup qualifier against the Republic of Ireland in Belfast in 1993, the most important goal was scored in Bucharest eight years earlier.

It was a pivotal moment in the qualifying campaign for the 1986 World Cup because Northern Ireland simply had to beat Romania to have any chance of reaching a second successive World Cup tournament.

The fact that Billy Bingham's men in green beat the Romanians, and then secured the point they needed in a 0-0 draw against England at Wembley, ensured Quinn's place in Northern Ireland football folklore.

And with Northern Ireland off to Bucharest for another important qualifying fixture, Quinn has been reliving his special moment.

The goal came in the 28th minute, Sammy McIlroy passing to the then Blackburn Rovers front man in the penalty area.

Quinn managed to retain possession before firing a low left-foot shot past keeper Silviu Lung for his first competitive goal for his country.

It turned out to be the only goal of the afternoon in Bucharest's National Stadium as Northern Ireland managed somehow to keep a crucial clean sheet.

"The second half was just one-way traffic and our goalkeeper Pat Jennings was something else," recalls Quinn, who was 25 when the match was played.

"But it was something we regularly did, ground out results against better teams, and this was a match we had to win.

"That was one of the best teams Romania ever had, with Gheorghe Hagi as captain, and they had not been beaten at home for five years. So, it was a bit daunting.

"On another day, Romania might have won three of four, the chances they had.

"The second half seemed to go on forever and I have never been so tired after a game. In the end, it was hard to believe we had gone there and beaten them.

"When you score a goal of that importance, you think about all the people you have made happy - supporters, family, team-mates.

"When the final whistle sounded, I thought 'there's a chance we could be going to a World Cup'.

"When we arrived back at Heathrow there were about 10 camera crews waiting for us, so you realise you must have done something special."

It set up the memorable November 1985 night at Wembley when Northern Ireland held out against Gary Lineker, Glenn Hoddle, Chris Waddle and company for the result which clinched their place at the World Cup finals in Mexico the following year.

And the never-to-be-forgotten interview with youthful NI defender Alan McDonald.

'Big Mac', who died in 2012, stared into the camera lens, pointing his finger, saying: "If anybody says that was a fix they can come and see me."

Those were glory days for Northern Ireland supporters, the like of which they have not since witnessed.

But Quinn feels the current team have a chance to make history by qualifying for the European Championship for the first time.

"They have a good blend of youth and experience. There are players there who can hopefully grasp this opportunity.

"We have never done it before and they have a great chance."