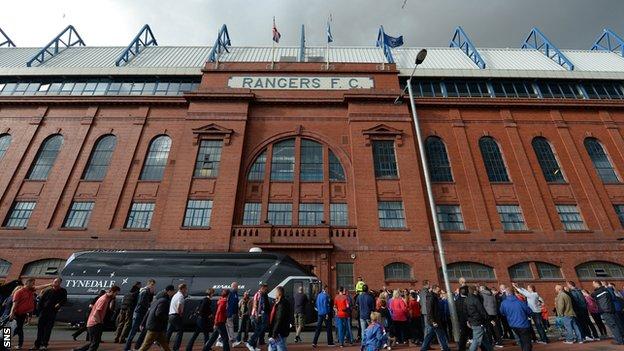 Mike Ashley will provide another loan to Rangers as the club continues to struggle financially.

The Newcastle owner, who owns about 9% of the Ibrox club, will increase an initial loan of £2m to £3m.

But the club says it will need more cash before the end of the year due to lower than expected match attendances.

It has also been announced that Ashley has given up the naming rights to Ibrox, which he bought for £1 as part of a retail deal two years ago.

A statement to the Stock Exchange read: "The Board of Rangers announces that MASH Holdings Limited has agreed to increase the £2m credit facility (the Facility) announced on 27 October with The Rangers Football Club Limited.

"MASH shall make available the additional sum of £1m for drawdown by the company on 26 November 2014. All other terms remain the same.

"During the autumn, the club has suffered from lower than expected match attendance which has exacerbated the financial condition of the business.

"The directors have begun a cost cutting exercise, but further working capital in addition to the Facility will be needed before the end of the year."

The BBC has learned that job losses are now likely at Rangers following news of the cost cutting drive at Ibrox.

It is understood the playing squad will not be cut, but a number of off-field staff are likely to lose their jobs.

Meanwhile, Ashley's Sports Direct company has agreed a new deal with Rangers that included the firm giving up the naming rights to Ibrox.

A separate statement to the Stock Exchange read: "The Board of Rangers is pleased to announce that Rangers Football Club Limited has entered into a partnership marketing agreement with SportsDirect.com Retail Limited in which Sports Direct has given up its naming rights to the Ibrox Stadium.

Rangers executive chairman David Somers said: "This agreement has been concluded to demonstrate the importance both parties place on our relationship.

"The Rangers board welcomes this visible demonstration of the Sports Direct support and long term commitment to Rangers."

Sandy Easdale, chairman of the Rangers football board, said: "It's a fantastic step forward for Glasgow Rangers to get the naming rights back."