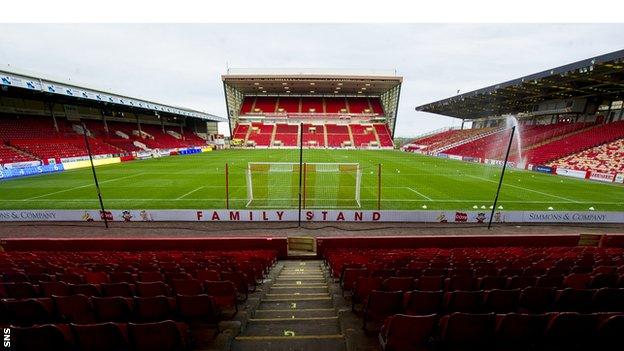 Aberdeen have agreed an investment deal that will wipe out the club's debts.

As the Dons released their annual accounts, it was revealed their net debt of £14.49m will be cleared if the restructuring plans are approved.

Willie Donald and his wife Elaine, who own the Stonehaven-based engineering company WM Donald, will become shareholders in the club.

The Pittodrie outfit hope to see the plans given the go-ahead at next month's AGM.

Aberdeen chairman Stewart Milne told BBC Scotland earlier this year that he remained optimistic that the club could soon be in a "debt-free position," as they target new training facilities and a new stadium.

In the annual club accounts, Aberdeen revealed turnover rose from £7.85m to £11.158m last season with wages increasing from £5.256m to £6.084m. The club say the wages increase is a result of higher bonus payments.

Milne told the club website: "The period covered in this report has seen a significant change in the fortunes at Aberdeen given the team's success in lifting the League Cup."

It was also confirmed that if restructuring plans are approved, Aberdeen FC Community Trust will also receive a "sizeable shareholding".

On the restructuring plans, Milne said: "The negotiations have been ongoing for a number of months now and these arrangements will, I believe, be transformational for the club.

"The club are indebted to Willie and Elaine for the role they have played in this. If the final steps are approved at the AGM we will have a strong balance sheet and the debt servicing burden will be removed, allowing us to drive forward on training facilities and the plans for the new stadium with much greater confidence in our ability to raise the additional investment needed."

Willie Donald said: "Our family recognises that we have been fortunate to have grown our business in a city and region that has benefitted from the impact of the energy sector over the last 37 years.

"We decided some time ago that we wished to give something back to the community, we see the football club as a vital and central part of the community, and indeed the whole North East of Scotland and see this investment as an excellent opportunity to deliver our objective."

As part of the restructuring plan, the net debt of the club will reduce by £14.49m and its share capital and reserves will rise by the same amount. Debt of £4.42m owed to the Stewart Milne Group will be converted to equity. SMG shareholding in the club will rise to around 43% but only up to 29.9% of this would be voting rights.

Aberdeen Asset Management will convert their remaining debt to equity and Willie and Elaine Donald will end up with a shareholding of around 20%.