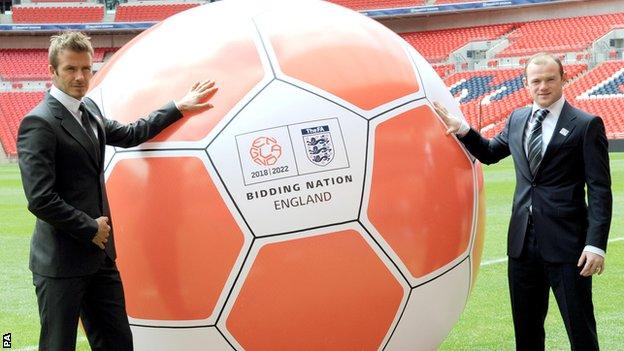 The English Football Association has been accused of flouting bidding rules in its attempt to stage the 2018 World Cup - but 2022 hosts Qatar have been cleared of corruption allegations.

A Fifa report says the FA behaved improperly when trying to win the backing of a key voter.

Qatar faced a number of claims surrounding its bid, but the Gulf state is now in the clear.

In effect, Fifa's long-awaited report ends talk of a re-vote.

In a statement, football's world governing body welcomed the fact that "a degree of closure has been reached".

However, the FA baulked at the criticism levelled at it, insisting it had "conducted a transparent bid".

A statement read: "We do not accept any criticism regarding the integrity of England's bid or any of the individuals involved."

The news that the FA has been criticised is a surprise given that it has repeatedly called for transparency in the voting process and accused Fifa of not doing enough to stamp out corruption.

The FA is accused of trying to "curry favour" with former Fifa vice-president Jack Warner, who quit his role in 2011 amid bribery allegations.

Individuals involved in England's bid could now face action following the conclusion of the two-year inquiry, which was led by American lawyer Michael Garcia.

Fifa's report, which also looks at the conduct of other bidding nations for both the 2018 and 2022 World Cups, makes a number of damaging points about the conduct of England officials.

In particular, it says England's bid team tried to win the support of Warner, who is from Trinidad & Tobago, by:

By doing so, it damaged "the image of Fifa and the bidding process".

They met Fifa delegates privately and attended the ceremony to announce the winners.

At the time, Prince William, who is president of the FA, said he was "immensely proud" to have been part of England's bid.

Fifa's inquiry looked at the conduct of all nine bidding teams who were trying to win the right to stage either the 2018 and 2022 World Cups.

It was initiated after a number of corruption allegations were made once voting had taken place in 2010.

Russia won the right to host the 2018 World Cup, beating off England as well as joint bids by the Netherlands/Belgium and Spain/Portugal.

To much surprise, Qatar were awarded the 2022 tournament, edging out Australia, Japan, South Korea and the United States.

Qatar were subsequently accused of paying Fifa officials £3m to secure backing for its bid.

However, they have now been cleared of wrongdoing, although the report said that there were "certain indications of potentially problematic conduct of specific individuals".

It concluded that payments by former Fifa vice-president Mohamed bin Hammam were judged to be for the disgraced Qatari's personal political interests, not the 2022 bid.

Qatari officials said they were busy digesting the contents of the report, but, in a statement, commented: "We co-operated fully with the ethics committee's investigation and continue to believe that a fair and appropriate review will demonstrate the integrity and quality of our bid."

As for Russia, they have also been cleared, although the report noted its bid team made "only a limited amount of documents available for review".

According to the report, the Russian team hired computers that were subsequently destroyed, denying the inquiry access to email accounts.

But Alexey Sorokin, the chief of Russia's 2018 World Cup organising committee, said his country had nothing to hide.

"We don't have any particular emotions because we were always confident that there could be nothing which would come out from this investigation," he told Sky Sports News.

"It's something Fifa deemed important to do. It was done, we participated, we complied. What more can we do?"

On the subject of the email accounts, Sorokin insisted there was a plausible explanation.

"There were no deleted emails," he added. "We rented the equipment, we had to give it back, then it went. We don't even know where it went."

Collins, who has campaigned for Fifa reform and in 2011 used Parliamentary privilege to make allegations that bribes helped secure Qatar the tournament, said those allegations remained unanswered.

"It is a whitewash as it is an attempt to con people that there has been a full and independent investigation when there has not been," he said.

"The result is that allegations of bribery and serious wrongdoing remain unanswered and they are still suppressing the full report."

However, that view was countered by Britain's Fifa vice-president Jim Boyce, who said Eckert and Garcia were "people of the highest professional integrity" who had conducted "extensive investigations".

Boyce added: "I feel it is now very important that people should concentrate solely on the wonderful occasion that the World Cup provides to the many millions of people who enjoy our game."

While the majority of England's bid team is praised for its co-operation with the inquiry, Lord Triesman is said to have twice refused to assist.

However, Lord Triesman told BBC sport editor Dan Roan: "I was being sued for libel by one of the members of Fifa and my lawyers said That I was not to talk to anybody else while the court case was proceeding. I was very eager to talk to Mr Garcia."

He said the criticism of the English FA bid was both "legitimate" and "embarrassing", but added: "The report is extraordinary. It reflects the fact that in Fifa there is a great dislike of England."

Australia have also been criticised. The report claimed they also made efforts to woo Warner and Oceania chief Reynald Temarii, including providing money for development projects.

The report also recommended that Fifa should improve the bidding process for future World Cups, urging it to adopt a "more open and transparent rotation system".

It also said members of Fifa's executive committee should be forbidden from visiting bidding nations and report any gifts they received.

In a statement, Fifa said it welcomed the recommendations, adding that it had "already revised the host selection process" for the World Cup.

It also said it would support any plans to open "future cases against officials based on the information obtained during this investigation".