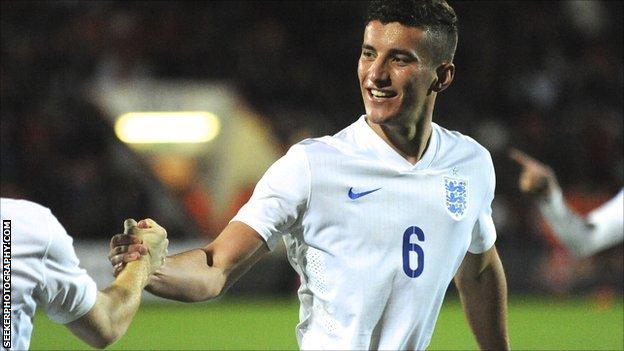 Bournemouth's Baily Cargill has described his debut goal for England's Under-20 team as the "best feeling" he has so far had in football.

Defender Cargill, 19, is enjoying a breakthrough season with the Cherries and marked his England call-up with a goal against Canada at Dean Court.

His header looked like it would win the game before a equaliser made it 2-2.

"I won't ever rest on my laurels, I want to keep working hard and improve," Cargill told BBC Radio Solent.

"It's the best feeling I've ever had, but was dampened by them scoring the late goal.

"I'm pretty disappointed we conceded so late on. We should have held firm and won the game. That's the most important thing, winning.

"If my goal was the winning goal, it would have been the best way to win the game from my point of view."

Cargill, who has made four appearances for the Cherries this season after spending last season on loan at Welling and Torquay, said he was pleased with his overall performance and vowed to build on the experience.

"I think for me to be in this position I am very privileged, I just need to keep working hard and enjoy my time," he said.

"I felt I did okay, I'm really pleased with how I performed and how it went for me. It shows the harder you work the more opportunities you get.

"It's an amazing feeling, if I carry on working hard then who knows where my career can go. If I keep my feet on the ground it could go anywhere."