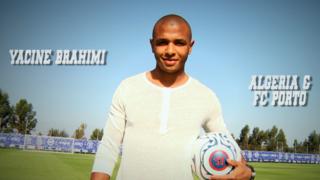 Nomination an 'honour' for Brahimi

Yacine Brahimi played a major role at the World Cup in Brazil as Algeria qualified for the group stages for the first time in their history. The attacking midfielder scored in the 4-2 win over South Korea, and earned a move from Spanish side Granada to double European champions FC Porto.

In April, he scored the winning goal for Granada against Barcelona in La Liga, and has scored twice in Africa Cup of Nations qualifying in 2014. On his nomination, Brahimi says "It's an honour for me, and makes me really proud. I represent not only my club, but also my country, Algeria, and all the Arab and African countries".

For details on how to vote for the BBC African Footballer of the Year for 2014, go to bbc.com/africanfootball.

England without Ryles for Six Nations