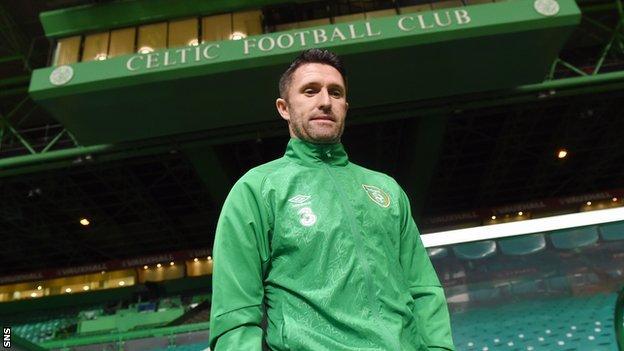 Republic of Ireland captain Robbie Keane hopes familiarity will help him find the net when he returns to Celtic Park for Friday's Euro 2016 qualifier against Scotland.

The striker scored 16 times in 19 games during a loan spell with Celtic from Tottenham Hotspur in 2010.

"In the past, I have been very, very lucky that I have scored a few on certain grounds I have been at before," said the 34-year-old. "I am certainly hoping that would be the case tomorrow."

Winger Aiden McGeady came through the youth ranks, striker Daryl Murphy had a spell at Celtic Park and current Hoops striker Anthony Stokes is also in the Ireland squad.

But Robbie Keane said: "It's clearly the same for both teams. There are a lot of players who have played here on numerous occasions and obviously the Scottish players have.

"I know there are players who haven't played here before and it's about keeping players' feet firmly on ground and not get too excited.

"These are the games that players want to be involved in. We haven't had a competitive game like this against a rival for a while, so it's certainly exciting."

Keane, who now plays in the United States for MLS side LA Galaxy, said his brief spell in Glasgow was a high point in his career.

"Coming from London and getting off that plane and coming to Celtic Park and there were 5,000 people was one of the best feelings you could ever get as a player - and just walking out at Celtic Park and putting on that green and white jersey," he recalled.

"It will be really strange to walk into the club and walk right to the away dressing room rather than left," he said.

"I said jokingly - and I think I actually mean this - I'm not even sure that I ever set foot in the away team dressing room, ever."

Ireland are joint top of the group with Poland, three points ahead of world champions Germany and Scotland.

"When we finish tomorrow night, we will have have played three pretty difficult away games and will still be in the hunt regardless, so what we do in the Aviva Stadium in 2015 will probably determine everything," O'Neill said.