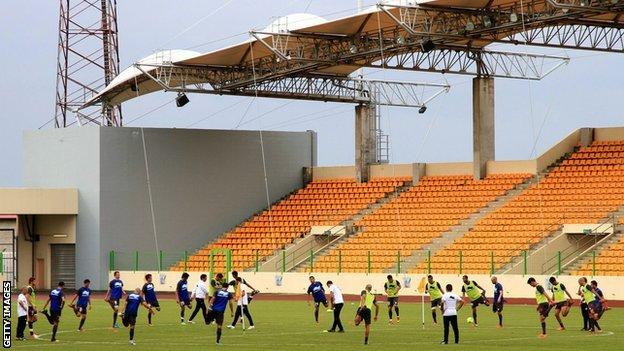 Equatorial Guinea have been named as the hosts for the 2015 Africa Cup of Nations, the Confederation of African Football has confirmed to the BBC.

Caf selected a replacement for Morocco after rejecting their request to delay the 17 January to 8 February finals.

Morocco were concerned over the spread of the outbreak of the Ebola virus.

Caf subsequently expelled Morocco from the relocated tournament, which will now be held in the country which co-hosted with Gabon in 2012.

Confederation of African Football's Junior Binyam told the BBC they have "no doubt" that it will be "a beautiful tournament" and one "up to the same standards of what we've seen in past years".

Equatorial Guinea will now take on sole responsibility for holding the 16-team event.

Caf said the decision was made after a meeting in Malabo on Friday between Equatorial Guinea's president Teodoro Obiang and Caf president Issa Hayatou.

African football's governing body also announced that Equatorial Guinea will play in the tournament - despite the team being disqualified in July for fielding an ineligible player in a preliminary qualifier against Mauritania on 17 May.

Hayatou said in a statement: "The head of state of Equatorial Guinea agreed to host the competition.

"As a result, the Caf executive committee confirms that the tournament will go ahead and Equatorial Guinea will compete as the host nation.

"Caf wishes to express its sincere thanks to the Equatorial Guinean people, its government and particularly president Obiang."

Matches will be held at four venues in Bata, Ebebiyin, Mongomo and the capital Malabo. In 2012, only Malabo and Bata were used.

The draw for the finals will be in Malabo on 3 December.