Wayne Rooney wins his 100th England cap against Slovenia at Wembley on Saturday still hoping for one more crack at World Cup glory.

England captain Rooney becomes the ninth member of the '100 club' as Roy Hodgson's side aim to make it four wins from four games in their Euro 2016 qualifying campaign.

Manchester United striker Rooney, 29, is not giving up hope of making up for three disappointing World Cup campaigns - the most recent being England's failure to qualify from the group stage in Brazil this summer - in Russia in 2018.

Rooney, who insists he will never call time on his England career, said: "It's so difficult when you're coming up to 30, to start planning the next four years.

"You have to be realistic, and there is a chance I might not go to that World Cup, but of course I would love to go."

Rooney will receive a golden cap from Manchester United and England legend Sir Bobby Charlton before kick-off on Saturday - accompanied by sons Kai and Klay - to commemorate his landmark appearance.

England are well on course for a place at Euro 2016 in France but Rooney also has sights on one more World Cup after playing in Germany, South Africa and Brazil.

"It's something I would love to go and do again for England," he said.

"You never know. The Euros could be my last one but it certainly won't be me saying it's my last one.

"I've always said you finish playing football at a young age, so I never want to cut my career short by deciding not to play for England.

"If I get picked to go to the World Cup I would be more than happy to do that."

Rooney's failure to make an impact on a major tournament after bursting on the scene at Euro 2004 in Portugal as a teenager with Everton is his major disappointment, but also a driving force to set that record straight.

"I have spoken openly about that tournament frustration," said Rooney.

"The first tournament was great, even though it ended injury, but the other ones have been disappointing.

"I feel I can do better than I have done and wanted to do better for the team but it hasn't happened."

Rooney admits his lowest ebb was his red card in the 2006 World Cup quarter-final against Portugal in Gelsenkirchen, which England lost on penalties, when he was sent off for kicking Ricardo Carvalho.

"I still believe to this day that if I had stayed on we would have won the game," he said.

""We could have won the game with 10 men so that was really frustrating for me.

"The high moment? I don't know. I would probably say the whole tournament in 2004.

"It was such a great experience for me to go there at such a young age and start all the games and score four goals." 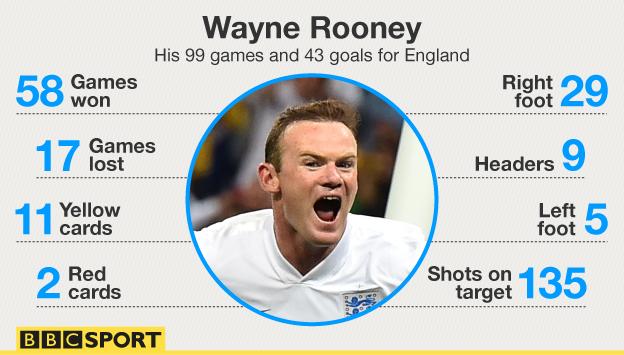