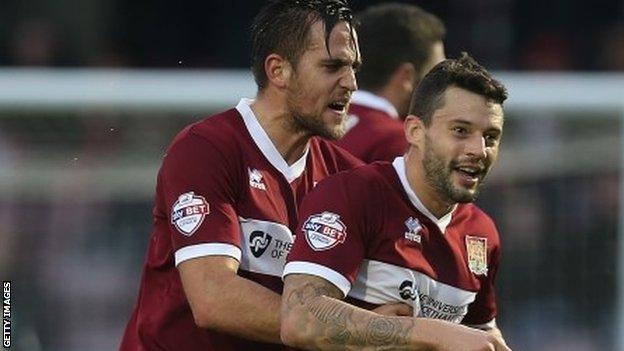 The striker headed over from six yards moments later as the Cobblers dominated the first 45 minutes.

Stevenage improved after the break and almost snatched a point when Lee Barnard hit the bar in stoppage-time.

"We've played OK today. I'm hoping our fans will go away from this match and enjoy their weekend.

"Even the top players sit deep when they are defending a narrow lead. It's difficult to overcome but this was our fifth game in 15 days.

"Kelvin Langmead is a popular boy in the changing room, as well as with the supporters. He has done a sterling job for us today."

"I have to say that I thought the second half of the performance tonight was outstanding. The attitude, the desire, the work ethic and the professionalism that the players showed was outstanding.

"Football results can lie sometimes. I don't think the score reflected what was on the pitch, I don't think anybody at Northampton would've complained if we came away with something tonight.

"There were a couple of guys that were being very rude, insulting. I've got family that sit there and they were talking to me in a disgusting way. The bulk of the fans were fantastic."