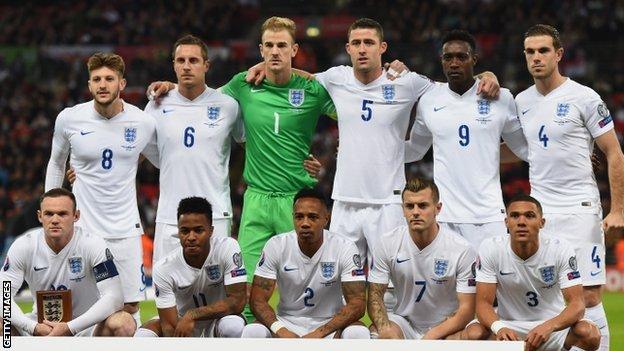 England maintained their 100% record in Euro 2016 qualification, but only after they were given a scare by Slovenia at Wembley.

Jordan Henderson headed into his own net before Wayne Rooney led the fightback with a penalty, his 44th goal for his country, on a night he won his 100th cap.

Danny Welbeck secured the 3-1 win with a quickfire double. But how did the striking pair and their team-mates fare overall?

Check out my ratings below:

Could do nothing about Henderson's own goal on another quiet night. Will need all his powers of concentration in England's qualifying group.

Did you know? Hart did not have to make a single save from a Slovenia player, with the visitors' goal coming from Henderson.

Solid debut display for the Southampton defender. Has a real chance to stake his claim at right-back with a shortage of genuine quality in that position.

Did you know? On his England debut, Clyne made 76 touches - only two players managed more.

Good block after Phil Jagielka's slip. Solid throughout although hardly under intense pressure. The mainstay of Roy Hodgson's defence.

Did you know? Cahill has played every minute of England's past 11 competitive internationals.

Lost possession in a dangerous area once in the second half and hurt himself getting booked for a clumsy tackle - but otherwise fairly untroubled.

Did you know? Jagielka made 82 passes, 19 more than any other player on the pitch.

Might have offered more going forward, but a display that pleased Hodgson from a very talented defender who wants to stake his claim alongside Leighton Baines and Luke Shaw. Helped to set up England's third goal.

Did you know? All five of Gibbs's England caps have come at Wembley.

Sterling's intent early in the second half helped lift England after that dismal first half and contributed to Welbeck's second goal.

Did you know? Sterling has created only one goalscoring chance in his past three appearances for England.

Still not convinced a deeper role gets the best out of his talents but once again effective. The odd raking pass to Rooney showed a promising link between the pair.

Did you know? Wilshere had the best pass completion rate in the game (94%).

Been a poor season for Liverpool's midfield man and sadly the trend continued here. Own goal and desperately out of sorts throughout.

Did you know? Henderson is the first England player to score an own goal since Glen Johnson against Sweden in Euro 2012.

Quiet night for Liverpool's midfield man but neat and tidy as usual and had a hand in the vital second goal.

Did you know? Lallana has played 90 minutes only twice in his 12-cap England career.

Arsenal's striker may be an unsung hero for England, but is a player Hodgson trusts totally - a trust he has repaid with five goals in this Euro 2016 qualifying campaign.

Did you know? Since signing for Arsenal on deadline day, Welbeck has scored 10 goals in 16 games for club and country.

England's captain celebrated his 100th cap by winning and taking the penalty to get his side back on terms. Energetic as ever.

Did you know? Three of Rooney's past four England goals have come from the penalty spot. Only one of his opening 40 England goals was a spot-kick.