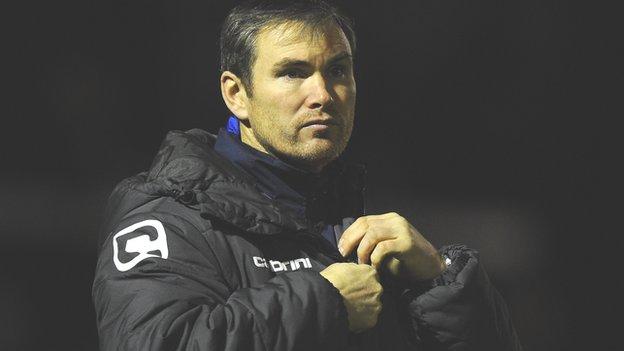 Kevin Wilkin says Wrexham's 1-0 defeat at Braintree in the Conference was their worst performance of the season.

Charlie Strutton scored the only goal of a game in which Blaine Hudson was sent-off for a second yellow card.

Wilkin's side have gone seven league games without a win and the manager was unhappy with the performance at Braintree.

"Without a shadow of a doubt that was the worst display of the season," he said.

"Certain players have made a lot of poor decisions and we allowed the game to become difficult for us.

"Braintree took the lead and when you're behind it's difficult to recover and they made it really difficult for us.

"I'm really disappointed with such a lacklustre display."

Wilkin was also unhappy with the late dismissal of Hudson, who was sent-off after picking up a second yellow card.

"Some of the decisions today have only compounded our day," Wilkin added.

"I'm adamant Blaine got the ball and didn't deserve to be sent off and when that happens it makes life really difficult.

"But going to 10 men is not an excuse for the rest of the performance. It needed to better."

Wrexham have not won in the Conference since a 1-0 home win against Kidderminster Harriers on 30 September.

Wilkin admits the lack of league wins is a matter of concern and the manager wants a response in their next game against Altrincham on Saturday, 22 November.

"We need to start winning games. We're not a million miles away from where the play-offs are," Wilkin added.

"Once we get that next win we'll kick off and I'd like to think we'll string a run together.

"We've got an opportunity next week."